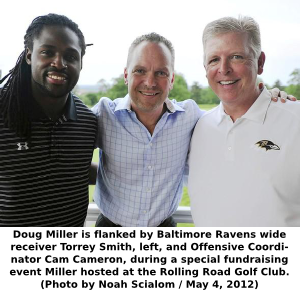 Doug Miller raised more than $70,000 in 10 weeks for Leukemia and Lymphoma Society

A relentless 10-week fundraising campaign has led to Doug Miller being named 2012 Maryland Man of the Year by the Leukemia and Lymphoma Society.

The Catonsville resident raised more than $70,000 in that span through his Relentless for a Cure campaign.

The Baltimore Ravens team chiropractor’s fundraising efforts included hosting a Preakness Party, arranging a meet and greet with members of the Ravens and organizing a last-minute email, phone and letter writing blitz.

“It feels great now. You can relax,” said the Arbutus native. “It’s like a piano off your chest feeling.”

Miller was one of eight nominees for the award who were chosen by the Leukemia and Lymphoma Society based on the amount of money they raised.

Each nominee had a final opportunity to raise money with an auction during a June 16 gala in Baltimore.

Miller said the event helped him raise an additional $9,000 thanks to bids on golf packages, a pair of boxing gloves signed by Muhammad Ali and football memorabilia.

Though he missed his original goal of $100,000 set before the campaign started, Miller said he would continue to collect until he reached that goal.

In 2008, Miller was diagnosed with Non-Hodgkin lymphoma. The father of three underwent chemotherapy for a year and improved an already healthy lifestyle before going into remission in 2009.

If he remains cancer-free for two more years, doctors will consider him cured.

Miller gave much of the credit for his campaign’s success to his wife of 18 years, Trish.

“She was certainly the team leader. She was the coordinator,” Miller said the evening after being named Man of the Year. “It was a full-time job for her for 10 weeks. More than 10 weeks.”

Trish Miller said that though the type of cancer her husband had has a high survival rate, it also has a high rate of return.

“Treatments now are so much different than 10 years ago,” she said, noting that it will likely improve over the next 10 years as well. “The treatment will be that much better because of the part we played in funding some of the research.”

Taking a well-deserved trip to Bethany Beach with her children, Trish Miller said she still has one final task to complete their fundraising campaign.

“Now I’ll be spending the next couple of weeks writing thank you notes to everyone,” she said.