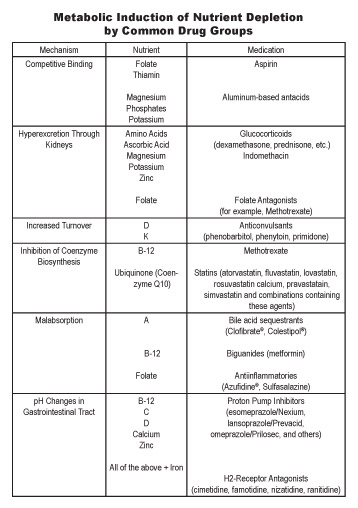 Abstract:  Detrimental effects of drugs on nutrition status are a common occurrence but, because they usually occur over time (vs. what is considered an adverse event or allergic reaction, which occurs quickly), they are seldom recognized or corrected. Chiropractic treatment, however, takes place over a much longer time frame. Because of this, doctors of chiropractic are in a unique position to recognize the interactions of medication and nutritional status and, if knowledgeable in the area of drug induced nutrient depletion, they have an opportunity to help their patients recover nutritional adequacy and restore metabolic homeostasis.

Thiazide Diuretics:  Hydrochlorothiazide (HCTZ) depletes magnesium, zinc, CoQ10 potassium and sodium. Side effects of the drug include the development of back pain, anxiety and leg weakness. And long term, it can even contribute to development of Type 2 diabetes. The depletion of magnesium alone can lead to all of the above-mentioned side effects. CoQ10 depletion significantly impacts energy production in cells because it is needed to shuttle carnitine into cells. Since heart cells are very dependent on that constant source of energy, CoQ10 depletion can really affect the heart, in addition to other large muscles. People experiencing CoQ10 depletion will often have noticeable muscle weakness. For example, I have had patients report much more difficulty getting up off the floor or even out of their chair.

I make it a regular practice to put any patients on HCTZ for high blood pressure on magnesium and CoQ10 at the very least; however, it is best if a multi vitamin includes some zinc and that they eat a high potassium diet. The CoQ10 is especially important to prevent the development of congestive heart failure, the very problem you are trying to prevent from the high blood pressure for which this drug is used.

Antacids
Proton Pump Inhibitors (PPI’s) such as Prilosec (omeprazole), Prevacid (lansoprazole), Aciphex (rabeprazole), and Protonix (pantoprazole) have long been known to deplete vitamin B12 and folic acid. The H2 blocking drugs like Tagamet (cimetidine) and Zantac (ranitidine) also deplete B12 and folate in addition to vitamin D and, because this category of drugs reduces stomach acid, it affects the absorption of the minerals, calcium, iron, and zinc.

These are the second leading category of drugs sold in the United States. While these drugs were intended only for short-term use, many people remain on these drugs for years without monitoring vitamin D status or other symptoms. Studies have now clearly shown a link between use of these drugs and increased risk of osteoporosis. In fact, PPI’s now actually carry a warning that they can cause osteoporosis. Typically, women are considered to be a greater risk of osteoporosis; but the studies found that these drugs also dramatically increased the risk in men, as well. So, it is important to be on the lookout for both men and women who are at risk of developing osteoporosis through long-term use of this category of drugs.

Oral Contraceptives
Oral contraceptives, likewise, cause significant chronic nutritional imbalances. In the past, we warned women that oral contraceptives depleted B vitamins, including folate, vitamin C, magnesium, selenium, zinc, and the amino acid tyrosine. Newer studies have found that oral contraceptives also deplete CoQ10. While it is well known that young women need to replace folate after being on birth control before trying to get pregnant, to prevent neural tub defects, it has been my observation that many young women undergo mood changes after going on oral contraceptives, in addition to noticing that they are very tired. Several studies have reported that the B6 depletion results in depression because of the reduced synthesis of serotonin in a subset of women. However, these depletions can lead to a host of problems including anemia, cervical dysplasia, bleeding gums, lowered immunity, and elevated homocysteine.

It has been discussed that these nutrient depletions were observed in older studies in which higher dosages of hormones were used. While I have noticed the effects of lower dosage birth control are not as pronounced as they used to be in the higher hormone dosage pills, depending on the woman’s nutritional habits prior to starting the pill, they can still have significant side effects.

The contraceptive Yaz (ethinylestradiol + drospirenone) gets tremendous interest from women and huge ad dollars. This medication has been approved in Europe long enough that the Belgian government financed post-release impact studies. Yaz causes a relative deficiency of zinc by causing accumulation of copper.7 Other contraceptives are also noted to cause a less severe accumulation of copper, but are better known for the depletions I mentioned above, as well as the disruption of the metabolism of the carotenes and tocopherols. Specifically, oral contraceptives frequently result in depletion of beta-carotene and gamma- (although not alpha-) tocopherol.8 Depletion of these important anti oxidants could increase a person’s risk of any of the diseases related to increased internal inflammation such as heart disease and cancer.

These are just a few examples of how important it is to consider drug actions on metabolism. Doctors of chiropractic are in an enviable position, because they can stop the downward spiral in their patients’ health by counseling on drug-induced nutritional depletions and, in so doing, can build patient trust and satisfaction. While this endeavor will require professional supervision of a carefully considered program of nutritional supplementation, appropriate care for nutritional balance will greatly enhance the ability to deliver the results patients expect and deserve.

Dr. James B. LaValle is a clinical pharmacist and board certified clinical nutritionist. He is co-founder of the LaValle Metabolic Institute and an adjunct professor of pharmacy practice at the University of Cincinnati College of Pharmacy and University of South Florida College of Medicine. He is the author of 16 books and has 25 years of clinical experience in pharmaco-nutrition and therapeutics. Call 1-513-366-2127 for more information.