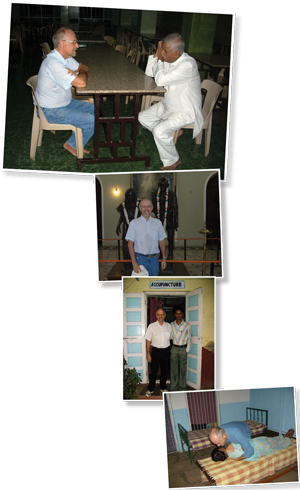 No alarm clock, no office to go to, I wake up. Isn’t there something I should be doing?

It goes off in his head like a fire cracker, not a big one, a cherry bomb; a little one, maybe a sparkler spitting burning white bits in front of his eyes, he thought, I’ll teach her to cook!

Speaking to my Grandmother, he said, “Addie, have you ever tried fixing—.”

Family history didn’t record any of his recipes, if any were ever prepared or eaten. Grandma raised seven kids, ran their farm while he was working as a brick layer, and did all the cooking  for more than 50 years when he got this idea.

The cooking lessons went poorly, but in those olden times, women rarely filed for divorce, even with good cause.

Modern times, marriages not lasting, I didn’t have anyone to teach to cook. If I did, I’d teach them before marriage and save attorney’s fees.

I could play golf. My Uncle, a retired Doctor of Optometry plays golf, pretty good too, no handicap, he practiced and played several times a week while he was practicing, several times a week since he was practicing, and is almost 90. I could play golf. Nine holes later my feet hurt, dragging that bag behind me was getting to be work and I was shooting 90. 90’s not bad for nine holes, is it?

Think about it. Am I a cook? Am I a golfer? Am I a TV critic with a column to write? Or—am I a chiropractor?

Lucky I’m not an MD or I’d be headed back for the one o’clock showing of Seventh Heaven. MD’s are a common bunch, eight of them to every one of us in the US. It’s worse overseas. But chiropractors, what about chiropractors? In India, 1 billion people, is a single chiropractor practicing there? If there is I didn’t find them—and I looked. I’m Dr. Jerry G. Knox, BA, DC, chiropractor, old, gray haired, what there is of it, and I volunteered to practice in India. You can get rich here, if you can get a work visa, up to 100 rupees a treatment. A hundred bucks a treatment ain’t bad. Let’s see, 100 divided by 52, that’s almost two dollars. No wonder there aren’t any chiropractors in India. I’d need to treat 500 patients just to pay the plane fare! If I’d come for the money, I’d have stayed stay home.

In India, we have more than 150 million well educated, middle class people working in IT and other industries that can fork out your 100 rupees anytime for an adjustment—if you have a work visa. Not having a work visa, you can do it for free at any one of hundreds of charitable associations. What is here is the chance to be of service as you have never been of service in the first world. First of all, there are those 150 million well educated Indians that need chiropractic care, many of them having lived and worked in Europe and the US and want chiropractic care—but it isn’t available in India—and is available.

There are bone setters, muscular Indian men, who hand down the art from father to son. Some of them are as good as the best of us. Are they educated? Do they have eight years of college? Do they know they are freeing up nerve flow, increasing or decreasing the firing rates of neurons at the IVF? They don’t, but they do it well.

Being an American, I wondered why naturopaths are the accepted natural healers in India. Why not chiropractic? Why did naturopathy survive and grow here and chiropractic never take off?

It has to do with a little man with round glasses. Mohatma Gandhi spent more time practicing and promoting naturopathy than he did politicking. He even founded two naturopathic cure centers personally. I know. I volunteered in one.

In 1946, when I was three weeks old, Gandhi was in Uruli Kanchan (a village near Pune, India) at the Nature Cure Ashram, treating patients. A smart man, he realized to change India you have to change villages. The cities were hopeless. They are still hopeless. Cities don’t change. Bombay may have changed its name to Mumbai, but with 40 million people in Mumba—change has to come from small groups and spread to larger ones. Gandhi came to rural villages and made centers of healing, promoted sustainable agriculture, spun wool, and sewed the fabric of a nation. He came to rural villages and returned to the cities with the people behind him and made them villages. He founded the nation of India village at a time.

Villages speaking more than thirty different languages remain the soul of one nation, India. Naturopathy remains. It was Gandhi’s system, the father of the nation’s system, his concept of naturopathy, nature cure. What if George Washington, Thomas Jefferson, John Adams and most of the other founding fathers of America had been practicing chiropractors? What would be our position in American society? Naturopathy enjoys that patronage in India, is licensed, and naturopaths are open to incorporating chiropractic into what they offer the public.

There is no base of practitioners nor the political will to establishing a separate chiropractic profession. In India, I was useful, chiropractic was useful, had I been a Gandhi, had I had a political agenda that would carry my health agenda, then maybe—but the reality is the following: naturopathy was inbuilt into the Indian system, as is bone setting. Gandhi brought out of the villages what was already there and gave naturopathy a status that could support it as a profession. Bone setting, accepted, but never given the support or institutionalization of naturopathy, remains an art practiced solely by lay practitioners with no recognized form of training. I adjusted necks, low backs, and stuck thoracic vertebra and was associated with bone setters by what I did in practicing the art of chiropractic, and naturopaths by being educated as a doctor. Chiropractic, an art unknown, except among Indians who have lived in the United States, has no identity in India. Bone setting is of a status lower than chiropractic should be. Naturopathy is of a status higher in India, than is chiropractic in America. We are educated doctors. Naturopaths are educated doctors. Yet to virtually all Indians, naturopaths are considered doctors, while in America much of the population refuses to accept that chiropractors are doctors, despite our training and scientific base.

To enter the Indian system we either follow the path of making chiropractic a non-science practiced by lay practitioners, or we join with the naturopaths who have the education and the desire to add chiropractic adjusting to their art.

Had I been a neurosurgeon, I could have brought in equipment, built a fine hospital and performed surgery—and helped people. Does that work? Does it help the people? It works in America with our deep pockets. American insurers are willing to cough up tens to hundreds of thousands of dollars to pay for skilled surgical work. Rich Indians are too, and they already have hundreds of such centers. They already have well trained medical doctors. Twenty-five percent of all MD’s practicing in America are from India or Pakistan. The Western medical model of a pill for every ill, and cutting for curing, has been well promoted to the Indian consumer base, but many Indian consumers, 900 million of them, don’t have the money to pay for it. One more unaffordable Western treatment center would be a waste to these 900 million poor Indians.

Almost a billion people in this country alone don’t have health insurance, or the money to pay for expensive Western treatments. The very rich, as rich as our very rich, can pay for anything. Most of the healthful middle class makes less than $800 a month and have things, little cars, motorcycles, homes, but medical care? Medical care isn’t free. Open heart surgery is $1500, but $1500 can be as much as a million dollars to the average American. In America dialysis keeps many with diabetes alive, even those on welfare in America. Without welfare, hundreds of thousands of diabetics die in India each year because they cannot afford dialysis. Neurosurgery is even more out of the question, but chiropractic? We use our hands, not scalpels in a sterile surgical suite, but hands while patients lay on beds, floors and one very fine adjusting table they made for me: I provided chiropractic care.

Working in a center staffed by six to eight naturopathic interns, I had a following. These interns, who go through a program as long as chiropractic or medical school in America, wanted to learn chiropractic adjusting techniques, and how and when to apply them. By including chiropractic related courses scattered through the five year doctorate program, and making their training equivalent to what we have in America, the science and art of chiropractic becomes part of Indian naturopathy and the benefits come to the people of India.

Several of these interns learned basics of adjusting and, as I mentioned, there are a range of naturopathic colleges that are open to a chiropractor teaching in their institutions. The possibilities for scientific research is high. Unlimited patients, naturopathic students who all must write a research paper to graduate, and Indian journals publishing scientific articles by naturopaths, or chiropractors, India could be a chiropractic research gold mine.

Don’t spend your retirement teaching your wife to cook, chasing a little ball around the woods, or watching Seventh Heaven. Go somewhere and do what old doctors do; teach young doctors, doctors wanting to do something, but not having the money to buy the stuff Western medicine advocates. Teach them to use what they have, what we all have—hands and minds. Chiropractic works, we know that. The basics of chiropractic is physical treatment, treatments that can be applied in ghettos or palaces. To the average Indian, American health care means unaffordable care in fancy buildings. Teach them the truth. American health care and Americans care for ordinary people with treatments that they can apply. They can be well through hands-on chiropractic, not sick because they can’t afford high tech medical care. The world needs chiropractic, and every chiropractor can change the world by educating patients and the doctors who treat them. Patients are waiting in every corner of the world to learn about us. They are waiting for you.

I have lived, practiced, and taught in Europe and America. Nowhere have I felt more alive or changed more lives than I have in India. America is the land of opportunity, the opportunity to make money, have a good life; India is the land of opportunity, the opportunity to help others, help them have a good life. The art of chiropractic is by hand, something they can use, and that makes a difference. Reach out, be chiropractors, and change the world, give back to the world as the world has given to you.

Retirement can mean sitting on your duff, waiting to die. Make it mean a time of life to give back, teach and help others.

Welcome to retirement—now get cracking, sorry, I meant adjusting!