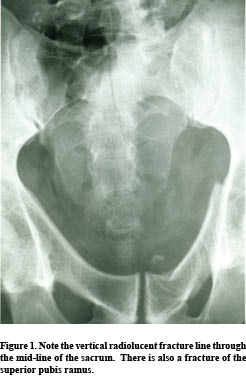 This young male patient fell off a horse and landed on his buttocks.

Sacral fractures usually occur as the result of a fall upon the buttocks, direct trauma or in association with pelvic fractures.  Isolated fractures of the sacrum are uncommon and a diligent search for an associated fracture of the pelvic ring or symphysis pubis is often beneficial (as seen in this case).  Two types are horizontal and vertical.

These are the most common types of sacral fractures.  The most common location is at the level of the third and fourth sacral tubercle, which is near the lower end of the sacroiliac joints.  The fracture line is frequently difficult to identify due to overlying intestinal contents, which may require reexamination or enema.  Careful identification of the cortex outlining each sacral foramen (“foraminal lines”) should be scrutinized for disruption or distortion.    The lateral radiograph occasionally demonstrates the fracture with disruption of the anterior cortex.  Often, the lower segment of the sacrum may be displaced or angled forward.  (1)

A horizontal fracture of the upper sacrum, affecting the first or second sacral segments, may occur from high falls such as attempts at suicide (“suicidal jumpers” fracture). (1)

These usually occur as a result of indirect trauma to the pelvis with more than 50% suffering pelvic organ damage.  They are visible on the frontal radiograph, but not the lateral view.  The cephalic tilt up view and/or CT may be necessary in order to demonstrate the vertical fracture line, which usually runs nearly the entire length of the sacrum.  The normally symmetrical transverse sacral foraminal lines should be carefully scrutinized for detection of the fracture line.

Most fractures of the coccyx are transversely oriented, similar to those of the sacrum.  Seldom are they seen on the frontal radiograph; the lateral film best demonstrates this type of fracture.  The fracture line is usually oblique in presentation, and slight anterior displacement of the distal coccyx is quite common.  Developmental variation in the position of the distal coccygeal segment may provide some concern to the inexperienced observer.