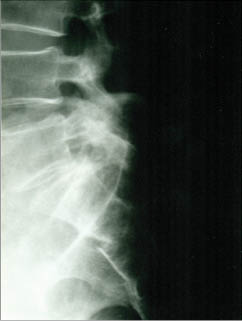 Case History:  This male patient was working on the roof of his garage when he slipped and fell 12 feet to the concrete pavement of his driveway.  He has sharp pain over his proximal sacrum. Does he have a fracture?
Diagnosis:  Note the fracture through the anterior surface of the second sacral segment creating an acute offset of its anterior cortical surface.
Sacral Fractures.
Sacral fractures usually occur as a result of a fall upon the buttocks or following a direct trauma. There are two types – horizontal and vertical.
Horizontal (Transverse) Fractures. These are the most common type of sacral fractures. The most common location is at the level of the third and fourth sacral tubercle, which is near the lower end of the sacroiliac joint. The fracture line is frequently difficult to identify due to overlying gas and feces. Often, a cleansing enema of the lower bowel and rectum before the radiological examination facilitates its demonstration.The lateral radiograph is usually required to demonstrate the fracture. Often, the lower segment of the sacrum may be displaced or angled forward.  (1)
A horizontal fracture of the upper sacrum, affecting the first or second sacral segments, may occur from falls from a height.  It is usually associated with suicidal attempts by jumping (“suicidal jumper’s” fracture).  (1)
Vertical Fractures. These usually occur as a result of indirect trauma to the pelvis. They are visible in the frontal radiograph but not the lateral view. The cephalic tilt-up view or a coronal C.T. scan may be necessary in order to demonstrate the vertical fracture line, which usually runs nearly the entire length of the sacrum.  (1)  The normally symmetrical transverse sacral foraminal lines should be carefully scrutinized for detection of the fracture line.
Isolated fractures of the sacrum are uncommon, and a diligent search for an associated fracture of the pelvic ring or symphysis pubis is often beneficial.
Coccygeal Fractures. Most fractures of the coccyx are transversely oriented, similar to those of the sacrum.  Seldom are they seen on the frontal radiograph; the lateral film best demonstrates this type of fracture.The fracture line is usually oblique in presentation, and slight anterior displacement of the distal coccyx is quite common. Developmental variation in the position of the distal coccygeal segment may provide some concern to the inexperienced observer.
Reference
1. Yochum TR, Rowe LJ: Essentials of Skeletal Radiology,
3rd ed.,Lippincott, Williams & Wilkins, Philadelphia, PA, 2005.
Dr. Terry R. Yochum is a second generation chiropractor and a Cum Laude Graduate of National College of Chi­ropractic, where he subsequently completed his radiology residency. He is currently Director of the Rocky Mountain Chiropractic Radiological Center in Denver, Colorado, and Adjunct Professor of Radiology at the Southern California University of Health Sciences, as well as an instructor of skeletal radiology at the University of Colorado School of Medicine, Denver, CO. Dr. Yochum can be reached at 1-303-940-9400 or by e-mail at [email protected]