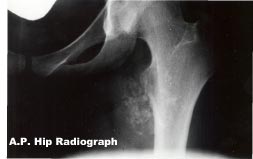 History: This 25 year old female has recently noticed a palpable mass in the upper inner thigh. She doesn’t recall any fall but does ride her horse on a regular basis.

Diagnosis: Post-traumatic myositis ossificans. Note the calcific mass near the lesser trochanter which was caused by chronic trauma to the adductor muscles while horseback riding. (Prussian’s disease)

Traumatic myositis ossificans (myositis ossificans posttraumatica, ossifying hematoma, traumatic ossifying myositis, or heterotopic posttraumatic bone formation) is a condition characterized by heterotopic bone formation in the soft tissues following trauma. The process occurs most often in muscle but may also occur in fascia, tendons, joint capsules, and ligaments. Most occur following any local injury sufficient to cause bruising of the muscle or a frank hemorrhage within it. The most common sites are the brachialis anterior (elbow), quadriceps femoris (thigh), adductor muscles of the thigh, medial collateral ligament of the knee (Pellegrini-Stieda disease), and in cases of rupture of the coracoclavicular ligament of the shoulder.1 The constant pressure of the saddle against the adductors in riders may cause ossification in the adductor magnus and is known as Prussian’s disease, or erroneously, as a saddle tumor.1 Bedridden and wheelchair-confined patients frequently produce heterotopic bone at areas of gravitational stress, most commonly found at the ischial tuberosities. Up to 50 percent of paraplegic and quadraplegics exhibit paravertebral ossification.1,2

The ossifying hematoma may be visible radiographically within three to four weeks after the initial injury.1 Magnetic resonance imaging may show the intramuscular hematoma from an early stage. Initially, the roentgen appearance is a fine, lacy radiopacity, which is followed later by a cloudy ossification within a well-defined mass. Its size depends upon the degree of initial trauma and the overall size of the hematoma. Eventually, sequential studies demonstrate a bony mass that is very radiopaque in its peripheral margins, with the center of the lesion appearing relatively radiolucent. The bony mass usually measures 4 to 5 cm but may be as large as 25 cm on occasion. The soft tissue osseous mass distinctively has no direct connection with the closest bone.

Radiologic diagnosis is essential, since biopsy of this mass in its early stages may show what would appear to be a sarcomatous change centrally. A radiologic sign important in making the distinction between this and a bone neoplasm is the characteristic lucent zone (cleavage plane) between the calcified mass and the subadjacent cortex.1,2 The mass is usually located adjacent to the diaphysis of a tubular bone, but the cortex of the bone is intact. Other important confirmatory properties are a dense periphery with a more lucent center and decrease in volume with time. Increased uptake of bone-seeking radionuclide may be noted which diminishes with maturity and inactivity of the lesion.1

Extraskeletal sarcoma may be difficult to differentiate from myositis ossificans. This condition is rare and tends to occur in older adults. Synovioma, in one third of cases, may calcify and can be located remote from the joint due to its association with tendon sheaths; therefore, this tumor must be given consideration when evaluating a calcified soft tissue mass. A parosteal sarcoma may have a similar appearance, but no lucent zone between it and the diaphysis should be visible. Other soft tissue calcifications such as tumoral calcinosis may present as a densely calcified mass but have an amorphous calcific rather than maturely ossific nature.2