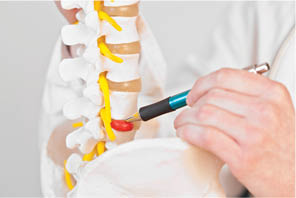 :dropcap_open:A:dropcap_close:lmost every Doctor of Chiropractic that has been in practice for 8-10 yrs. or more has experienced the chagrin of treating a patient for a subluxation and afterwards having them discontinue care, only to find out later that the patient was doing very well after a surgical disc operation.  After experiencing 1 or 2 of these embarrassing scenarios, we may come to realize that there may be more information involving a subluxation than meets our chiropractic eyes.

7. Very much credit must be given to Dr. James Cox for his persistent teaching of the herniated disc theory over 30 years ago.  I believe he was the first DC that instituted traction or distraction to correct bulged or herniated discs. Moreover, he invented a chiropractic table and taught seminars on how to correct these problems. His work is great evidence that validates that the majority of spinal pain is caused by disc pressure on spinal nerve roots.
8. Long Term Cryotherapy (LTCT) is very effective in reducing disc pain because it tends to contract the disc, and the tissues surrounding the swollen disc, relieving pressure on the SNR. If the source of the spinal pain was subluxation alone, cryotherapy could not contract the hard substance of the offending bone to produce the relief that LTCT consistently does.
9. There are medical pain clinics springing up in various areas of the nation who advertise aggressively their minimal surgical technique to shrink the NP by laser surgery. They claim nearly 95% results. If the disc was not the offending cause, would they even get close to that % if only the subluxation existed?  They are so confident of their results that some of them don’t even accept insurance.  Cash only.  Cost to the patient?  10 to 20 thousand.
10. Could this be why the chiropractic general adjustment works so well? When adjusting bilaterally down the entire length of the spine we often hear many audible releases. Could those releases be small protrusions being replaced (anteriorly) toward their normal positions?
However, chiropractors need not worry, because our treatment is less costly and will one day become the treatment of choice.
For we can correct a large percent of subluxations/herniations a lot more reasonably and with far better outcomes than any other  method.  That doesn’t mean we can correct all disc protrusions, but most of them, in almost all areas of the spine. Therefore, it would be reasonable for people to try chiropractic first, medicine second, and surgery last, in that order to rid themselves of musculo-skeletal pain.
We all can do the job, but chiropractic can and should be tried first for 3 major reasons:
1. We can reduce multiple protrusions during each patient’s treatment, saving the patient untold amounts of future health care costs.  No other health profession can do this.
2. Even though repeated treatments may be needed, because discs can re-bulge with time, chiropractic is the lowest cost of all disc reduction methods.
3. Since we can reduce the majority of disc herniations, then the few that won’t respond to chiropractic can be referred to other more costly and risky methods (decompression, laser, drugs, orthoscopic surgery, bone fusion, or the newest attempts of disc replacement). However, the most reasonable route to improvement is firstly the low-cost chiropractic way.
In Conclusion:
Therefore, when disc involvement is detected by physical exams, MRIs, CT scans, etc., our diagnosis must include disc bulge, protrusion, or herniation along with subluxation. Whenever the profession adopts this finding, progress can be made with insurance acceptance, and with other healing professions. When the occasional patient isn’t responding well, the DC, having diagnosed the patient with subluxation/herniation, can refer them to the next level of appropriate treatment. He/she will have been credited with a correct diagnosis and will look good in the eyes of his/her patients, medical doctors, and surgeons. Subsequently, the chiropractic profession will gain in stature.
When this truth is fully accepted by chiropractic, the public, and other healing professions, then and only then will people use “Chiropractic first, medicine second, and surgery last.” Whoever created that phraseology was “right on target”.
Can you envision it?  If everyone used Chiropractic FIRST, there literally wouldn’t be enough DCs to take care of the people. This may be a long way off, but it could happen in our future.
The TRUTH of a correct hypothesis shall set us free.
John W. Fiore, DC, attended Purdue University, majoring in Chemistry, Physics, and Biology graduating from Lincoln College in 1954.  Practiced together with his brother for 40 years and invented the “Back-Huggar” in 1968, and the “Neck-Huggar” in 1982, and founded Bodyline Comfort Systems in 1968.  Served five years as secretary of Florida Chiropractic Association.  Author of “Discaltic Aberrations of the Spine”  (Disc Theory of Chiropractic) published in the 1974 Edition of the Journal of Clinical Chiropractic.