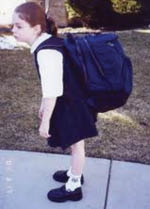 :dropcap_open:T:dropcap_close:he controversy and dialog about the problem with backpacks has raged for decades. Many groups have done “studies” to determine the extent of continuing trauma to young people literally saddled with carrying numerous books in backpacks that can easily weigh as much as 15% or more of their total body weight.

Organizations such as The American Chiropractic Association and the American Orthopedic Association have sponsored and performed numerous studies to determine the long term effects of heavy backpacks on the musculoskeletal frame of children. The results of these studies have been published almost continuously in national and international journals.

Everyone agrees that the “Back Pack Syndrome”(Figure #1) is a real and threatening danger to the structural health of children in their formative years. The degree of threat varies from one “report” to another with some going as far as saying it can contribute to “Developmental Scoliosis.” The preponderance of information available on this subject shows no good evidence in support of this theory. However, the occurrence of back pain symptoms in children who carry a high percentage of body weight in their backpacks is supported by numerous studies published in high-quality journals from around the world. There is no doubt that the problem exists. The dilemma is…what do we do about it?

All sorts of suggestions have been presented from proper weight distribution (not carrying the pack on both shoulders equally) to designing a more ergonomic backpack (Figure #2). To have a better understanding about the confusion surrounding this problem, perform a Google search of “Images, Backpacks.” Daunting, to say the least. Of the dozens of pictured suggestions there are arguments for the adoption of each one in eliminating the problem. However, none of these suggestions eliminates anything. At best, they “accommodate” the child to the pack. We, as chiropractors, are always telling our patients that we treat the “cause” of the problem, not the “symptom.” Designing a better backpack treats the symptom! To eliminate the “cause,” we simply need to get rid of the backpack entirely.

One suggestion for this is “wheeled”(or in Europe and Asia, “trolley”) backpacks. I believe the airline industry was first in connecting “continuing trauma”workers compensation disability claims with heavy backpacks. The solution reached by their research department was to require the use of special wheeled cases for their pilots and flight attendants.

While this approach may take the weight off the child’s shoulders and back, putting it onto the cart, other issues then come into play. Probably the most serious for young people, especially boys, is teasing and harassment from peers about being a sissy, weakling or any number of inventive, disparaging remarks their “friends” can come up with. Another problem is the issue of stairs. Most schools from kindergarten to universities abound with stairs of every type and description. As a result, we not only have the weight problem to contend with, we also have the awkward and unwieldy (no pun intended) handle and wheels to lug up those pesky stairs. Yes, the handle retracts and there are straps on the trolley, but how many kids are going to bother with that when the bell rings and they’re in a rush?

Others are still promoting the re-institution of school lockers. However, there are a number of inherent problems with school provided lockers in every part of the world; for instance, cost, danger (e. g., drugs, weapons, pornography), graffiti, continuous abuse, damage and repair and last, but not least, hiding younger classmates for later release at the most embarrassing moment.

:quoteright_open:With the tens of billions of dollars spent each year on school books, the savings to Government and State Education Departments would be enormous.:quoteright_close:

In today’s digital age, and advanced computer technology, a possible solution to this widespread and potentially disastrous problem exists. It is possible to put every word of every book in existence into electronic format. Indeed, this “paperless revolution” is already being done by just about every publishing house in the world except, for some reason, the educational materials publishers. How simple it would be to take those very heavy textbooks and transfer that material onto a CD or post it on a password protected website. Teachers could hand out assignments via email or on a thumb drive. Students would then upload the information to their computer (Do you know any student who does not own one?), follow the “menu” to the appropriate chapter and study directly from their computer. Most of them do this anyway, even though they still have to lug the physical books around. This solution eliminates all but the smallest pack that would be used to hold and transport the CD’s. With the tens of billions of dollars spent each year on school books, the savings to Government and State Education Departments would be enormous. Maybe this is part of the problem. With the incredible profit margin made by the educational publishing houses, I’m sure the publisher’s lobby would surely do everything possible to block this advancement. Where are the environmentalists, “Tree Huggers,” when you NEED them?

Editors note: Please feel free to write to Dr. Le Beau with your comments, questions or opinions at [email protected]

In February of 2010, the IMU <www.imu.edu.my> started the very first chiropractic program in Southeast Asia and is one of a few Medical Universities in the world to have a chiropractic school as part of their medical education offerings. In addition, the IMU opened their 5000 sq. ft. chiropractic clinic on campus, in May 2010, of which Dr. Le Beau is Director.