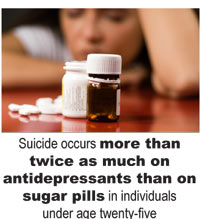 Prior to the 20th century, mood disorders and mental illness were treated with a variety of obscure and often barbaric methods including frontal lobotomies (with no anesthesia), exorcisms, and shamanistic potions.

Dr. Benjamin Rush, the “father of American psychiatry,” was the first to believe that mental illness is a disease of the mind and not a “possession of demons.” His classic work, Observations and Inquiries upon the Diseases of the Mind, published in 1812, promoted the belief at the time, that “madness” was an arterial disease, an inflammation of the brain.

Dr. Rush wrote that as much as “four-fifths of the blood in the body” should be drawn away. Rush bled one patient forty-seven times, removing four gallons of blood over time. He confined others in his “Tranquilizer Chair” that completely immobilized every part of their bodies for long periods and blocked their sight with a bizarre wooden shroud, while they were doused in ice cold water.

In the early 1900’s, frontal lobotomies and electrical shock therapy were standard fair.

Insulin Coma Therapy was introduced into psychiatry in 1933. And within a few years, every psychiatric clinic in Germany was doing Insulin Coma Therapy. Along with all the praise it received, it was also associated with a very high mortality rate and eventually lost its appeal.

In 1954 the first “modern” sedative drug known as Thorazine fueled by a huge promotion campaign by Smith, Klein & French, swept the nation. This new medication along with Haldol, spawned an additional class of drugs known as benzodiazepines (tranquilizers). The effect of taking these drugs was explicitly compared to having a lobotomy, and they were thought to induce “chemical lobotomies.” Thorazine became the drug du jour during the 1950’s and the number of individuals taking it went from 428 in 1952 to over 2,000,000 in 1957.

In the 1960’s, Hoffman La Roche was successful in marketing the benzodiazepine (tranquilizers) Librium and Valium. Benzodiazepines became a frequent recommendation for any number of illnesses associated with mental stress. In fact, these drugs became known as “mother’s little helper.”

To combat the ills of modern day stress, housewives, college students, and busy executives were encouraged to take these medications. Valium became the best-selling drug at that time. Klonopin, Ativan, and Xanax followed, all hailed as safer and more effective than the anti-anxiety drugs that preceded them.

Forty percent of adults, sixty or older experience drug-induced tics or tardive dyskinesia (tremors or uncontrollable shakes) from taking a benzodiazepine drug. Tragically, only 10 to 30 percent are able to successfully stop taking these drugs. Most are addicted for life. (Please see my past article, “SOS Save Our Seniors”).

The first SSRI to hit the American market was Prozac in 1987 (please see my past articles “Warning Your Antidepressant May be Your Problem,” and “The Depressing Truth About Antidepressants”) and was quickly hailed as the “wonder drug” of the 20th century. But, like many of the so-called “wonder drugs,” Prozac and the rest of the SSRI drugs haven’t lived up to all the hype. The popularity of these medications is largely due to the false belief that SSRI’s are safe, effective, and have relatively few risks. However, their side effects include-anxiety, depression, headache, muscle pain, chest pain, nervousness, sleeplessness, drowsiness, weakness, changes in sex drive, tremors, dry mouth, irritated stomach, loss of appetite, dizziness, nausea, rash, itching, weight gain, diarrhea, impotence, hair loss, dry skin, chest pain, bronchitis, abnormal heart beat, twitching, anemia, low blood sugar, and low thyroid.

In December of 2006, the FDA warned that SSRI drugs cause increased suicidality in young adults. Suicide occurs more than twice as much on antidepressants than on sugar pills in individuals under age twenty-five. And to top it all off, studies show that up to 70 percent of those taking antidepressant medications do just as well by taking a placebo or sugar pill.

The new class of “wonder drugs” for the treatment of mood disorders is known as atypical antipsychotics: Zyprexa, Risperdal, Geodon, Ivega, Abilify, Clozril, and Seroquel. Originally used for schizophrenia and bi-polar patients, atypicals have now become routine in the treatment of ADD, anxiety, depression, and Alzheimer’s disease.

They’re being marketed as safer and more effective than the older antipsychotic benzodiazepines—less shakes, better response. Of course, like most wonder drugs, they come with a steep cost—atypicals cost some twenty times more than the older psychotic drugs. The FDA has gone on record warning that there’s no proof that these drugs are safer or better and any advertisement that promotes this is false.

No problem. Even though they couldn’t promote their drugs, the drug companies could and did hire academics and doctors to recommend these drugs.

In an attempt to squelch the debate, in 2005 the U.S. government funded a $60 million study called CATIE (Clinical Antipsychotic Trials of Intervention Effectiveness). The study concluded, first, atypicals were generally no more effective than the older drug, perphenazine (similar to Haldol) and, secondly, slightly fewer people on atypicals dropped out of the study due to tremors, but the new drugs had their own distinct side effects—weight gain and diabetes.

Stay tuned. I’m sure there will be another antipsychotic “wonder drug” appearing in a media campaign soon. I can’t wait to hear how the new drug is safer and more effective than today’s atypicals.