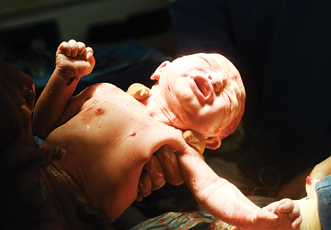 Scoliosis is a three-dimensional spinal deformity characterized by lateral deviation.1  Most cases of scoliosis are classified as idiopathic,2 which is not a diagnosis as much as a failure to diagnose.3  Idiopathic scoliosis is further subdivided into age-grouped categories; however, these are assigned by the date of detection, rather than the true date of onset.4  Since scoliosis screenings are most often conducted in middle school, around 10-12 years of age, it is perhaps no surprise that adolescent idiopathic scoliosis is the most recognized form of this disorder,5 estimated to affect 4.5% of the population.6  However, it is highly probable that these cases did not develop spontaneously in adolescence, but had precluding factors that manifested even earlier.  In his book, Scoliosis, Fred Barge dissented with the medical opinion that scoliosis develops during adolescence, and instead opined that what we term adolescent idiopathic scoliosis in fact has its roots in early spinal development.7

The relationship between birth injury and upper cervical misalignment manifesting as torticollis and scoliosis has been previously described in the literature.  It is perhaps no coincidence that Dr. Barge’s book, Scoliosis, was the third volume in a three-volume set, after the second volume entitled Torticollis.  Professor Hans Mau explored the relationship between torticollis and scoliosis,8 and an article published by Bredenkamp et al. in 1990 listed prevention of scoliosis as one reason to treat torticollis.9  In April of 1990, Dr. R.B. Mawhiney published an article in this magazine entitled Spastic Torticollis and its Relationship to Spinal Scoliosis, which details the case report of a 39-year-old woman who experienced a 50% reduction in the severity of her scoliosis and a 75% improvement in cervical ranges of motion following eight months of chiropractic care.10  The management of torticollis by chiropractors revolves around upper cervical care, typically involving the atlas specifically, and there are implications that misalignment of the atlas may be involved in the development of certain cases of scoliosis.

Reports in the chiropractic literature suggest the effectiveness of upper cervical chiropractic care in influencing the resolution of scoliosis.  Kirk Eriksen describes a nine-year-old male with a misaligned atlas; after five months of chiropractic care involving only five upper cervical adjustments, the patient experienced an 88% overall reduction in his scoliosis.11  Jaszwewski and Sorbara reported on a seven-year-old female with a mild scoliosis and a previous history of birth trauma; after one month, there was a 62% improvement in the Cobb angle.12

This article presents the effects of specific chiropractic adjustments and rehabilitative therapy in a six-year-old male with scoliosis and a previous history of a difficult birth and surgical management of torticollis.

The patient is a six-year-old male who presented for treatment at a private chiropractic clinic.  After an artificially-induced, forceps-assisted delivery, he was diagnosed with Flat Head Syndrome and torticollis.  At the age of two, subcutaneous tenotomy of the left SCM was performed.  The parents were later told by a physician at a different hospital (and one well-renowned for the quality of its care) that the operation was performed on the incorrect side.  It was also at this time that the scoliosis was first detected; there was no prior family history of scoliosis.  The parents were not told the degree of scoliosis upon diagnosis.  Initial medical “treatment” of the scoliosis consisted of observation only, with routine x-rays, CT scans, and MRIs performed every nine months until the condition worsened enough to justify more invasive treatment.  The patient also had a history of ear infections, respiratory issues (pneumonia), and gastrointestinal problems.

The patient presented with a 38 degree thoracic dextroscoliosis and a 20 degree lumbar levoscoliosis.  A low-dosage (0.91 rad/min) Digital Motion X-Ray (DMX) examination was performed, which revealed temporomandibular joint dysfunction on the left, and bilateral alar instability, which was worse on the right.  The DMX also showed the flexibility of the curve:  the thoracic and lumbar curves reduced to 5 degrees and -14 degrees respectively on lateral bending, indicating the thoracic to be the primary structural curve.  Anterior head translation, a significant misalignment of the atlas, and a kyphotic lumbar spine were also noted on conventional radiography.  Grid photography revealed marked postural asymmetry of the trunk and a positive Adam’s sign.  Surprisingly, center of balance testing performed on the Nintendo Wii Fit TM 13 indicated almost perfect weight distribution bilaterally.  Although the patient reported no pain subjectively, objective range of motion assessments showed significant limitations and asymmetries.  Cranial asymmetries were noted in the physical exam, including a right occipital indent, a left parietal bulge, and left translation of the sphenoid.

Treatment began with active spinal mobility exercises, repetitive cervical traction, and massage therapy.  Vibration therapy was applied at 4 Hz to relax the spine prior to the adjustment.14  A motorized drop piece was used, which is based upon SOT blocking techniques,15 to address the postural changes common in scoliosis.  Used in conjunction with foam wedges, an impulse force of 6 Hz is combined with gravity to balance the pelvis and thorax through strategic placement of the wedges.  Positioned under the shoulders, the goal is to reduce head forward posture and rounded shoulders (commonly referred to as Upper Cross Syndrome).  Underneath the ribs or pelvis, the goal is to reduce rotation.  Flexion/distraction therapy performed in a “mirror-image” configuration aided in rehabilitating the disc wedging and stretching the soft tissues on the concavity of the curves.  During the initial examination, spinal misalignments were quantified with a three-dimensional system of radiographic analysis and mensuration.

Chiropractic precision full-spine adjusting procedures were then applied based around these objective findings.  Cranial adjusting was also performed in accordance with the exam findings noted earlier.  Post-adjustment, the patient performed neuromuscular re-education therapy, first on a balance training disc with the aid of strategically-placed body weights and a weighted cantilever, and second seated in a customizable chair that incorporates de-rotation with axial and lateral traction; whole-body vibration therapy was incorporated with both procedures as a means of improving proprioceptive feedback.

After two visits conducted on the same day, a follow-up scoliosis x-ray and A-P open-mouth x-ray were taken.  The thoracic and lumbar Cobb angles reduced from 38 and 20 to 21 and 9 respectively, which is a 49% overall improvement.  The atlas misalignment reduced from 4 degrees to 1.

:quoteright_open:The relationship between birth trauma and scoliosis is not well-described.:quoteright_close:

A PubMed search using various combinations of the MeSH keywords ‘scoliosis,’ ‘torticollis,’ and ‘birth injuries’ yields depressingly few results, and most that appear cover surgical aspects of management of torticollis, very few of relevance to chiropractors.  One of the few that does appear is a follow-up to Mau’s work, explaining a syndrome of clinical features involving plagiocephaly, torticollis, and infantile scoliosis.16  The relationship between birth trauma and scoliosis is not well-described.  While it is known that birth trauma such as breech presentations and the use of forceps are associated with a higher incidence of scoliosis,17,18 and that scoliosis often develops after injury to the spinal cord,19-21 the mechanisms behind how and why this occurs have not been researched.

It is also worth mentioning the link between plagiocephaly (Flat Head Syndrome) and infantile scoliosis; in almost 100% of cases of infantile scoliosis, there is malformation of the occipital bones, and in 96% of these cases the side of malformation correlates with the convexity of the scoliotic curve.22,23  The medical approach to the management of plagiocephaly is to prescribe a plastic helmet for the child to wear, which can cost up to $2,500 and in many cases is not covered by insurance.  It is typically worn for six weeks, and the average reduction in cranial asymmetry is around 60 to 75%.24   It may be worth the effort of further research to determine if chiropractic cranial adjusting techniques could be of value in the management of plagiocephaly, and in turn provide the idiopathic infantile scoliosis patient with additional treatment options besides observation only, plaster casting, or surgical fusion.

The relationship between upper cervical misalignment, birth trauma, torticollis, and scoliosis – while of great interest to our profession and well-supported by the chiropractic philosophy – does not have a great deal of support in the indexed literature.  The case studies outlined in this article, as well as this additional case report, provide compelling evidence for researchers in our profession to explore how birth trauma and misalignment of the upper cervical spine may contribute to the conditions of torticollis and scoliosis, and also to determine when chiropractic care may be of value in these cases, as well as what chiropractic procedures will have the optimum benefit.

Dr. Dennis Woggon graduated from Palmer College in Davenport in 1974.  He founded the Saint Cloud Chiropractic Clinic the same year and continues to maintain an active practice.  He has taught seminars on spinal biomechanics for 25 years, and is an internationally-recognized speaker.  He has been certified in video fluoroscopy since 1992.  He is the Founder of the CLEAR Scoliosis Institute, and also founded the CLEAR Scoliosis Treatment and Research Clinic; this clinic is located on the campus of Parker University, and is the first clinic devoted to scoliosis to be founded on the campus of a chiropractic college.  He can be contacted at [email protected]tute.org.

Dr. A. Joshua Woggon, a 2010 Graduate of Parker College, is the Associate Director of the CLEAR Scoliosis Treatment and Research Clinic in Dallas, Texas (www.clearscoliosisclinic.com), and the Director of Research for the CLEAR Scoliosis Institute, a Non-Profit Organization dedicated to advancing chiropractic scoliosis correction (www.clear-institute.org).  He can be contacted at [email protected]