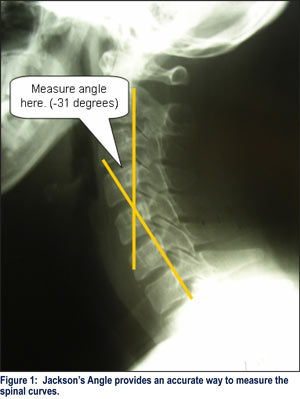 The Lateral Films–Objective and Reliable Evidence

For years, we’ve been bombarded about the need for objective evidence to support our care programs. Third party payors and peer review types are the first to nail doctors who fail to document clinical findings with hard, objective evidence. In a time when our very right to take X-rays is under assault, many doctors aren’t aware of how much scientific documentation is available to support the validity of certain X-ray measuring techniques. This is particularly true if a biomechanical analysis of the lateral radiographs is included as part of the workup. Since this issue’s focus is on X-ray and other diagnostics, let’s talk about the reliability of the information we get from the lateral films.

Many chiropractors will perform a radiographic exam on a typical new patient. Once the decision to X-ray has been made, two perpendicular views (Ex. A-P and lateral) are generally considered the accepted minimum. For the purposes of our discussion here, let’s assume that you have elected to get A-P and lateral films on your patient. What kind of information can we get from a simple lateral film and how reliable is that information?

As it turns out, we can learn a lot from the lateral films. In addition to the diagnostic value of the films, the amount of biomechanical information we gain is significant. I would make the case that no other films offer the chiropractor as much relevant information as the lateral spinal views. By taking just a few moments to make some simple measurements, we can actually get a great deal of reliable, objective information about our patient.

Jackson’s Angle: First popularized in the late fifties by Ruth Jackson, MD, in her landmark book, The Cervical Syndrome, this simple measurement gives us a wealth of useful information about the patient’s biomechanical status. Measurement of Jackson’s angle generally requires the construction of only two simple lines and a measurement of the resultant angle of intersection between the two. Fig. 1 shows how lines are constructed along the posterior body of C2 and C7 and drawn down and upward respectively until they intersect. Once this is done, it is a simple matter to use a protractor to accurately measure the acute side of the angle. The method can be used equally well in the thoracics and lumbars as well.

Jackson’s Angle tells us exactly how much lordosis is present in our patient. While there is some disagreement in the scientific literature as to how much lordosis is needed for long term spinal health, there is basically no disagreement at all regarding the validity and reliability of measuring the angle on the films. A number of studies have looked at this measurement and determined that the angle can be reliably measured with a very small margin of error.

Occasionally, the lines from C2 and C7 won’t intersect in the neck. This typically happens when the patient’s sagittal posture has assumed some sort of “S-shaped” configuration. If that happens, it becomes a simple matter of just drawing a third line off one of the middle vertebrae so as to best represent the middle of the “S.” (See Red line in Fig. 2) Now, instead of two lines intersecting to form a single angle, we have three lines intersecting to form two angles. In this case, we drew the additional line off C4.

Anterior Head Carriage: Finally, we can easily get one more important piece of information…an accurate analysis of the weight bearing status of the spine. We do this by simply extending a line straight upward from the posterior-superior corner of T1. That line should intersect the C1 vertebrae at the junction of the posterior arch and the lateral mass. If the head is held forward of the line, a common finding, we would record it in millimeters as a positive number. If the head is carried posterior of the reference line from T1, we would record the position as a negative number. Fig. 3 shows a patient with pronounced forward head carriage.

With one simple film and a couple of quick measurements, we now have an accurate picture of the patient’s overall spinal status and an objective benchmark against which we can gauge the efficacy of any treatment efforts directed at restoring normal posture. Best of all, this method of measurement is well established in the scientific literature and should stand up very well, if you are ever questioned about your findings.

Dr. Mark Payne is the president of Matlin Mfg., a manufacturer and distributor of postural rehab products since 1988. To learn more about implementing postural rehab into your practice, call 1-334-448-1210 or link to www.MatlinMfg.com to request our FREE REPORT, “The Best Corrections of Your Career.”