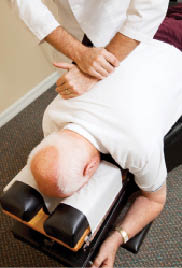 :dropcap_open:I:dropcap_close:s it possible to walk through a doorway when the door is closed? That strange question is a metaphor that can be used to describe the difference in research-based rehabilitation to prepare the spine for corrective procedures with little to no pain versus no preparation at all or, worse yet, substituting bilateral strengthening exercises for rehab to prepare the spine for corrections that are often both painful and ineffective.

Gym type exercises are often called rehabilitation exercises. However, the two have little in common. Gym type exercises are isotonic that work and shorten muscles, thereby opposing positional changes. Phasic muscles are enervated by a1-motor fibers and are consciously controlled and, when totally fatigued or injured, become flaccid. Postural muscles are enervated by a2-motor fibers and are autonomic nerve controlled. The strengthening of these muscles requires isometric exercises. When they are fatigued or injured, they become spastic. It is critical to understand that postural muscles dominate one’s spinal position and function as well as posture, stance and gait.

1. “The restoration of normal form and function after injury or illness.”

2. “The restoration of an ill or injured patient to self-sufficiency or to gainful employment at the highest attainable skill in the shortest period of time”.

The profession of chiropractic claims that the adjustment is for the restoration of normal form and function of the spine through correction of spinal displacement subluxations. We can agree that abnormal/subluxated spinal forms cause abnormal functions.

Surveys show that the clinical procedures taught in chiropractic colleges and practiced by 84% of the profession involve the use of a sudden applied force into the subluxated spine, referred to as an adjustment or treatment.

What do the adjusting forces actually do? Is it possible to physically correct spinal displacement subluxations without first preparing the spine to welcome the force through rehabilitating the soft tissues that hold the static spine upright while in a normal or abnormal (subluxated) position?

Research published in 1996, by JMPT, titled “Lasting Changes in Passive Range of Motion after Spinal Mobilization,” a Randomized, Blind Controlled Trial, tested spinal changes produced by diversified and toggle recoil adjusting. Their findings were that these adjustments caused about a 5% increase in mobility and the changes lasted for about 7 days. A more recent article published in the Spine Journal demonstrated with pre and post MRI studies that the same kinds of adjusting resulted in the spine becoming measurably more displaced than before it was adjusted. Chiropractic adjusting, without first performing rehabilitation to prepare the spinal soft tissues for change, typically has shown little success in making gross structural spinal and postural changes. This also was tested and published in JMPT. The authors were Harrison, et al in 1997, and Lantz et al, in 2001. In 1975, Jowett and Fidler published research in Orthop. Clin., N. Amer. that proved the body changes phasic fibers into postural muscle fibers on the convex side of spinal displacement subluxations; hypo mobility and nerve root compression were also noted.

Neuro-muscular research has proven that the dynamic stretch reflex guards all body parts including spinal position, even if it is in a subluxated position from being changed by sudden applied forces. Guyton’s Physiology 5th and 6th Edition, explains how the dynamic stretch reflex causes muscles to replace body parts after a dynamic force has displaced them. Muscles intercept sudden applied forces of up to .3 of a second in speed. The phasic muscle fibers can contract fast enough to counteract these sudden applied forces. This reflex protection is automatic, unless the force is faster than .3 seconds or so great that they tear the muscles and then the ligaments, thereby causing spinal subluxations.

The protective energy of the muscles can be greatly reduced by slowly stretching the phasic and postural muscles rather than attempting to exercise them. To be effective, stretching should last at least 40 seconds and include all muscles involved.

:quoteright_open:Hysteresis can temporarily remove up to 95% of the ligament’s holding energy and lasts for approximately six minutes.:quoteright_close:

Ligament research has proven that to instantly change a vertebrae’s position, the adjusting force would have to overcome 40% of the ligament’s resisting force. Such high forces are impossible for a doctor to produce and could crush the vertebrae before the ligament entered the plastic range necessary, before instant positional change of a vertebra can occur. However, rehabilitation procedures that cause disks and ligaments to go through full range loading and unloading cycle’s for 2 to 5 minutes produces a condition called hysteresis, which gradually lowers the resistance of spinal disks and ligaments, thereby making changes in spinal position possible, easy and pain free. Hysteresis can temporarily remove up to 95% of the ligament’s holding energy and lasts for approximately six minutes after loading and unloading cycles are discontinued. Within 15 to 20 minutes after loading and unloading cycles are discontinued, the ligaments regain all of their holding energy.

Loading and unloading cycles in the cervical spine requires slow, intermittent traction, while effective loading and unloading cycles in the lumbo-sacral spine require full range, figure 8 cycles that are slowly applied, requiring 4 seconds to complete one cycle after the ligaments are completely stretched. The figure-8 cycles also mix and re-mix the protoglycine aggregate of the disk’s nucleus necessary for making and maintenance of a perfect jell. Like fluids, the jelled nucleus is non-compressible. When perfected, it equally transfers body weight from the vertebrae above to the vertebrae below, thereby providing a foundation for maintenance of the corrected spine’s form and function. In addition, the figure-8 motion pumps the cerebral-spinal fluids necessary for the metabolic interchange of glucose to feed the brain, thereby giving the patient a feeling of mental and physical well being—an additional benefit of the rehab procedures! Home care instructions work in tandem with clinical care and will include the use of deep, diaphragmatic breathing in coordination with specific rehabilitation procedures. These procedures take into account the fact that the thoracic spine is approximately 13 times less flexible than the cervical spine and approximately 3 times less flexible than the lumbar spine; therefore, thoracic loading and unloading cycles require more time and concerted rehabilitation procedures. Patients are taught to prepare their spine both in the clinic before being seen, as well as at home before daily activities and rest.

Change is inevitable for the growth of any profession; without it, stagnation and eventual decline is the end result. Through the use of clinical research and documentation with new and more efficient methodologies, we grow in our knowledge and our abilities. The Pettibon Biomechanics Institute has published several retrospective as well as blinded studies, proving through pre- and post- X-rays that permanent spinal corrections are possible after the spinal soft tissues have been prepared through our holistic rehabilitation procedures. Research can be found at www.pettiboninstitute.org.

Burl R. Pettibon, DC, FABCS, FRCCM, PhD. (Hon) has guided The Pettibon Institute’s direction, continuing education offerings, and research since the Institute’s inception as the Pettibon Spinal Bio-Mechanics Institute in 1981. As a teacher, inventor, and researcher, Dr. Pettibon’s influence and contributions to the science of chiropractic are legendary. Dr. Pettibon has been an extension faculty member and lecturer at Palmer College of Chiropractic for more than 35 years. He has also been an extension faculty member at Life University, Logan College of Chiropractic, Parker College of Chiropractic, and Cleveland Chiropractic College—where he received his degree in 1956. Dr. Pettibon has written more than 65 papers and books on chiropractic care and research. Over the course of his career, he has developed 25 clinics. At the present time, the profession is using the more than 50 rehabilitative products that he has invented to make the detection and correction of vertebral displacements both easier and more accurate. He currently holds four patents. Papers and books are also available through www.pettibonsystem.com.