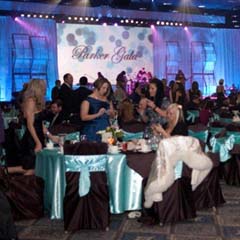 Over the last several years, the profession has made great strides in gaining acceptance among both the public and the greater medical community. Millions of dollars are given to medical research each year with only a small number of federal grants being awarded to projects involving chiropractic. The gala proceeds provide grants to support small studies conducted by researchers at academic institutions. These studies become significant when the research project is published in scientific or peer-reviewed chiropractic journals, and this achievement serves as the bridge to secure larger federal and foundation grants.

Cleveland Chiropractic College and Southern California University of Health Sciences were recognized as having already received research grants from a portion of the 2010 gala proceeds. The two institutions also received a complimentary registration to this year’s Parker Seminars Las Vegas.

The Drugless Research Hall of Fame Award was presented to the third inductee, Dr. Arlan W. Fuhr, president of The National Institute of Chiropractic Research and co-founder and chief executive officer of Activator Methods International. Dr. Fuhr was honored with the award because of his dedication to chiropractic research and pursuit of excellence as a chiropractor to impact the health care of the world without drugs. Dr. Fuhr is the co-inventor of the Activator® Adjusting Instrument and the Activator Method Chiropractic Technique®. In 1985, he received the first grant ever given to chiropractic from the National Institutes of Health. The Drugless Research Hall of Fame is an innovative recognition platform designed by Parker College to showcase significant drug-free contributions in research worldwide.

During the gala, honorary host, Nick Vujicic, president of Life Without Limbs, shared his inspirational story, the story he has shared with millions around the world. Vujicic a native of Melbourne, Australia, was born without arms and legs. Obstacles did not stop Vujicic and at age 28, he has accomplished more than most people accomplish in a lifetime. He is the president of an international non-profit organization, Life Without Limbs, and also has his own motivational speaking company, Attitude is Altitude.

Guests were entertained by Makusa, a band made up of Parker College students. Their repertoire was a smooth blend of blues, rock, and latin grooves, which kept attendees on the dance floor. Additional entertainers included Song Division and Matthew H. Montgomery. Song Division consists of world-class musicians with major recording and performing credits, including The Trans Siberian Orchestra and Broadway’s Rock of Ages, and who have performed with elite members of Queen and Led Zeppelin. Matthew H. Montgomery, a Parker student who toured the nation as a professional musician before coming to Parker, shared his musical talent as an acoustic guitar player, songwriter, and singer.

Investools from TD Ameritrade Holding Corp. and Drucker Labs showed tremendous support and assisted with the gala’s success as major sponsors of the event.

If you’re interested in contributing to support chiropractic wellness research, please contact the office of development at 877.971.9525.