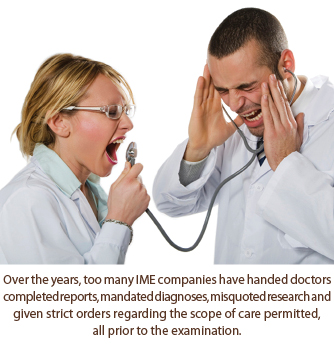 :dropcap_open:T:dropcap_close:he IME, or independent medical examination, and peer review processes are necessary and integral steps in maintaining a system of checks and balances in health care billing in order to prevent unnecessary care. Over the last two decades, the system has evolved to where too many doctors who are hired by the carriers through an IME company (middle man) or directly by the carriers are not performing examinations that are remotely close to independent. Going back 20-30 years, you could historically find inaccuracies in how the insurance companies hired doctors that reported on the conditions of the patients.