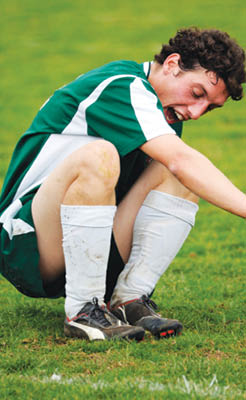 The patient is a 15-year-old female soccer player, who reports frequent pain for the past several months in her left hip and posterior thigh region.  The pain is most noticeable the day following a highly physical soccer competition or scrimmage, when she experiences tightness and tension in the back of her upper left thigh.  She denies any specific injury, but admits that she has been playing especially hard since getting caught up in the excitement of following the U.S. team in the 2011 FIFA Women’s World Cup this past summer.  She finds that lying down and putting warm towels around her hip helps the most.

Vitals.  This athletic girl weighs 129 lbs, which at 5’6’’ results in a BMI of 21 – she is very active and fit.  She is a non-smoker, and her blood pressure and pulse rate are well within the normal range.

Chiropractic evaluation.  Motion palpation identifies a left sacroiliac fixation, with moderate tenderness and loss of endrange mobility.  Straight leg raise is limited to 78° on the left by pain at the hamstring origin.

Primary complaint.  The left hamstring is weaker than the right on manual muscle testing, and palpation finds tenderness at the left ischial tuberosity and slightly increased tension in the proximal hamstring muscle.  All knee and ankle ranges of motion are full and pain free.

Adjustments.  Adjustments of the left SI joint and left foot and ankle were provided as needed.  The adjustments were supplemented by contract-relax stretches for the left hamstring muscle.

Stabilization.  Individually designed, stabilizing orthotics were fitted into her soccer shoes, and another pair was provided for daily wear.  Both were custom made for her postural needs.

This focused young athlete responded rapidly to the adjustments and strengthening exercises.  She adapted to the individually designed stabilizing orthotics with little difficulty, and reported that her ankles and knees felt more secure when on the field.  Within two-and-a-half weeks of receiving the orthotics, she had no post-exercise pain or tenderness.  She was released to a self-directed home stretching program after a total of eight visits over six weeks.

:dropcap_open:Knee, upper leg and hip pains in a young person with a still-maturing skeleton always raise concerns of ischemic necrosis.:quoteleft_close:

Knee, upper leg and hip pains in a young person with a still-maturing skeleton always raise concerns of ischemic necrosis (Legg-Calve-Perthes) and slipped femoral capital epiphysis.  This teenaged athlete had no x-ray evidence of either condition, but did have a biomechanical asymmetry in the lower extremities, which caused a functional short leg.  Appropriate, focused treatment consisting of adjustments and stabilizing orthotics, along with stretching and strengthening exercises, brought about a rapid response.

This patient found wearing individually designed stabilizing orthotics in her soccer shoes to be effective in helping reduce her hip symptoms and enhancing her athletic performance.  Studies have found a significant decrease in electromyographic activity of the hamstring muscles during running while wearing orthotics.  This is thought to be due to the increased stability of the ankles and knee joints, which allows greater relaxation of the hamstrings during gait, especially when running.