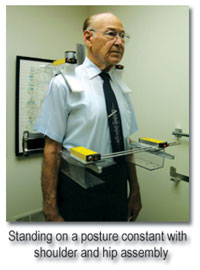 To start with, an imbalanced spine is because an atlas subluxation is affecting the brain stem. This affects the muscle balancing mechanism in the central reticular formation.

As a result, it produces spastic muscles on one side of the body, more than the other side, and produces a distorted pelvis and a contracted ilium. It also shortens one leg when compared to the other leg when the patient is in a supine position.

The National Upper Cervical Chiropractic Association (NUCCA) chiropractic technique predicts that, with an achievement of an 80% or better reduction of an atlas subluxation, the patient will immediately have a balanced and stronger spine. The following information came from a patented invention that uses laser lights to measure the distortions of the spine in three dimensions. Where did all this start? It started with a suggestion from a lay person, Mrs. Mary Ann Dickholtz, about 7 years ago. She has been married to me for 56 years and has also raised two certified NUCCA chiropractors, Dr. Sherry Dickholtz Gaber and Dr. Marshall Dickholtz Jr. Mary Ann suggested that I use laser lights to examine a patient’s spine. This started the development of this very accurate patented posture-constant invention. The patient stands on a platform that is perfectly level and parallel to a wall chart. The patient’s heels are in the slots on a platform that is directly below their acetabulum. This is the patient’s base of support and all spinal measurements are taken from this position.

There are two separate units that will be called harnesses. Laser lights are mounted on each side of these harnasses. One harness sits on the shoulders and the other, coming from behind the patient, is slightly compressed over the superior crest of the ilii. One laser light on the right side of each harness shows a dot and the other side has a laser light that shows a line that represents a possible horizontal line. These lights are displayed on a chart with horizontal and vertical lines. They are spaced about two inches apart in two directions, one vertical and one horizontal. The chart is 6.5 feet in front of the patient. As dots from the laser lights shine on the chart, they would indicate if there is a torque in the transverse plane in the shoulder or pelvic girdle. They would also show a correlation of the relationship of the two separate dots that are projected from each of these units. The horizontal line would represent any tilt on the shoulder or pelvic tilt in the frontal plane. There is also a laser light with a vertical line that is mounted on a wall to the side of the patient. It is for evaluating the sagittal plane of the patient.

After using this new posture-constant for seven years and the research that proves the value of a NUCCA correction, I can now give you this information. In a non subluxated patient, the pelvic girdle should be directly over their feet. It has to be level within one half of a degree (less than one eigth of an inch) as to the tilt of the pelvic girdle in the frontal plane. It is measured with the laser harness placed on the patient’s ilii or the calipers of a posture constant that are placed on the ilii. Any torque in the pelvic girdle can be measured when the pelvis is over the patient’s feet. The dots from the lights will give both the translation and torque of each girdle. Translation refers to the patient’s body moving right or left of their base of support. If you are using a posture-constant, like the anatometor, it can measure translation of both girdles. Without a posture-constant, translation can be measured when there is another laser light that is mounted on a wall behind the patient. A projected vertical line from this laser that bisects the slots, where the patient’s heels would be placed would show any translation of the sacrum or the shoulder girdle, right or left of their base of support. If there is no translation, any torque from either girdle can be measured accurately. There shouldn’t be more then a two degree torque in the pelvic girdle in relationship to their feet. The shoulder girdle is not weightbearing. It doesn’t settle down as readily as the pelvic girdle.

In a non subluxated patient, the shoulder girdle could be level or within a tilt of only one or two degrees. In 99% of the cases, the shoulder torque should be less than four degrees in relationship to their pelvic girdle torque. There are numbers on the chart where these calculations can be retrieved.

This is measuring the torque over seventeen vertebrae. It equates to only one quarter of an inch. It is also one of the most revealing facts that the laser lights demonstrate. Chiropractors have never realized its importance. The torque can be the first or the last indication that there is an atlas subluxation or an incomplete correction. The shoulder girdle or pelvic girdle torque is magnified about 40 times with these laser lights. So, the very smallest torque is now evident. Once again, this is a very important finding.There shouldn’t be any torque between these two girdles of four degrees or more if the patient’s spine is totally balanced.

The last part of the examination is the sagittal plane. A laser light unit, mounted on a wall lateral to the patient, shows a vertical line that is aligned to the patient’s ankle. It can detect the alignments of the acetabulum, glenoid fossa and ears, as they relate to the ankle. I have seen some fast changes in these measurements after a subluxation is removed. In older patients, the ear to shoulder relationship alignments can change very slowly. This is the background for what has to be the answer to detecting a perfectly balanced spine. Every chiropractic researcher has to have this knowledge that is correlated to a stressor at the brain stem level. How can any outcome studies, be fully successful when investigated from a subluxated spine? This stressor has been proven to affect both the central and autonomic nervous systems.1,2