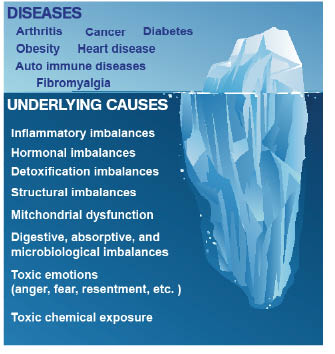 :dropcap_open:F:dropcap_close:unctional Medicine is patient-centered medical healing at its best. Instead of looking at and treating health problems as isolated diseases, it treats individuals who may have bodily symptoms, imbalances, and dysfunctions.

As the following graphic of an iceberg shows, a named disease such as diabetes, cancer, or fibromyalgia might be visible above the surface, but according to Functional Medicine, the cause lies in the altered physiology below the surface. Usually, the cause of the disease and its symptoms is an underlying dysfunction or an imbalance of bodily systems.
Named diseases are just the tip of the iceberg. Below the surface, according to Functional Medicine, are the real causes of a patient’s health problems.
If health care treats just the tip of the iceberg, it rarely leads to long-term relief and vibrancy. Identifying and treating the underlying root cause or causes, as Functional Medicine does, has a much better chance to successfully resolve a patient’s health challenge.
Using scientific principles, advanced diagnostic testing, and treatments other than drugs or surgery, Functional Medicine restores balance in the body’s primary physiological processes. The goal is the patient’s lifelong optimal health.
How Functional Medicine Heals a Key Health Care Gap
Today’s health care system is in trouble because it applies a medical management model that works well for acute health problems to chronic health problems, where it is much less successful.
If you have a heart attack, accident, or sudden lung infection such as pneumonia, you certainly want a quick-thinking doctor to use all the quick-acting resources of modern medicine, such as life-saving technology, surgery, and antibiotics. We are all grateful for such interventions.
However, jumping in with drugs, surgery, and other acute care treatments often does not succeed in helping those with chronic, debilitating ailments, such as diabetes, heart disease, or arthritis. Another approach is needed.
The Two-Pronged Healing Approach of Functional Medicine
To battle chronic health conditions, Functional Medicine uses two scientifically grounded principles:
Plainly put, your body naturally wants to be healthy. However, the body may be missing things needed to function at its best, or something might be standing in the way of its optimal functioning. Functional Medicine first identifies the factors responsible for the malfunctioning. Then it deals with those factors in a way appropriate to the patient’s particular situation.
Functional Medicine practitioners often use advanced laboratory testing to identify the root cause or causes of the patient’s health problem. Old-fashioned medical diagnosis helps too, in the form of listening carefully to the patient’s history of symptoms and asking questions about his or her activities and lifestyle.
For treatment, Functional Medicine practitioners use a combination of natural agents (supplements, herbs, nutraceuticals, and homeopathics), nutritional and lifestyle changes, spiritual/emotional counseling, and pharmaceuticals, if necessary to prod a patient’s physiology back to an optimal state. In addition, educating patients about their conditions empowers them to take charge of their own health, ultimately leading to greater success in treatment.
Treating Symptoms Versus Treating the Person
In the dominant health care model today, medication is used to get rid of people’s symptoms. If the patient stops taking the medication, symptoms generally return.
Functional Medicine approaches health problems differently. Instead of masking the problem, it aims at restoring the body’s natural functioning. Although Functional Medicine practitioners may prescribe pharmaceuticals, they use medications to gently nudge the patient’s physiology in a positive direction so the patient will no longer need them.
:dropcap_open:Another important saying by Osler is: “If you listen carefully to the patient, they will tell you the diagnosis.”:quoteleft_close:
For example, conventional doctors would normally prescribe pharmaceuticals like Prilosec, Prevacid, or Aciphex to treat acid reflux or heartburn. When the patient stops taking such drugs, the heartburn symptoms come back. In contrast, a Functional Medicine practitioner might find that a patient’s acid reflux is caused by Helicobacter pylori bacteria. Eradicating the Helicobacter pylori might very well lead to the end of heartburn symptoms, permanently.
It’s also important to note that in Functional Medicine treatment for similar symptoms might vary tremendously for different patients, according to their medical histories and results of laboratory tests. Factors that can come into play in producing the same symptoms include toxic chemicals, pathogenic bacteria, parasites, chronic viral pathogens, emotional poisons like anger, greed or envy, and structural factors such as tumors or cysts.
The Roots of Functional Medicine
You may be surprised to learn that the concept of Functional Medicine isn’t new. It actually represents a return to the roots of modern scientific medicine, captured in this statement by Sir William Osler, one of the first professors at Johns Hopkins University School of Medicine and later its Physician-in-Chief: “The good physician treats the disease; the great physician treats the patient who has the disease.”
Another important saying by Osler is: “If you listen carefully to the patient, they will tell you the diagnosis.” This encapsulates the importance that Functional Medicine places on taking a thorough history from the patient.
Your Experience of Functional Medicine
When you consult a Functional Medicine practitioner, the first step is always your history. Practitioners are trained on how to unravel and make sense of a complicated story. Often clues in the story lead to the identification of key imbalances.
The next set of clues comes from a comprehensive physical examination, which includes many nearly forgotten examination procedures used by famous diagnosticians (both living and long gone), such as chapman reflex points, ankle brachial reflex, and nail inspection.
The final set of clues comes from advanced laboratory testing. Innovative, cutting-edge lab tests help the practitioner look deeply into a patient’s physiology to identify how it has been compromised and how physiological balance can be restored.
After diagnosis and treatment, a Functional Medicine patient can expect his or her symptoms to diminish in severity, along with a renewed sense of well-being and significant increase in health and vitality.
A Functional Medicine Sampler of Case Studies