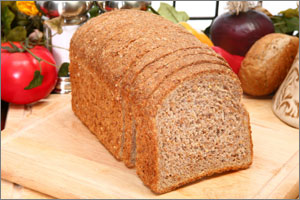 :dropcap_open:M:dropcap_close:ost are aware that gluten consumption will ignite the expression of celiac disease in those who are genetically susceptible. Readers should also be aware that the expression of gluten sensitivity need NOT be celiac disease. In about 50% of those with gluten sensitivity, the gastrointestinal symptoms begin in childhood. About 22% will manifest gastrointestinal symptoms after childhood. Almost 30% of patients will manifest non-digestive symptoms, short stature, chronic fatigue, amenorrhea, anemia, and others will be asymptomatic.1

A chiropractor recently told me the story of his son who suffered with a severe case of eczema from about year one of life until the age of five. At times, the eczema was so severe that this little boy’s feet would bleed and ambulation became difficult. Two years prior, this DC attended a seminar, in which I explained the intense pro-inflammatory potential of grains which, in part, is due to their gluten content. This doc went home after the seminar and eliminated all grains from his house and the child’s diet. Within two weeks of grain removal, the eczema had cleared up, and has not returned to date.

Additionally, gluten sensitivity can be primarily and, at times, exclusively a neurologic disease.3

Consider the following case history: A 50-year-old man presented for a neurologic consult because he had recently developed right-sided headache and nausea associated with confusion and agitation. He had experienced episodic headache for 4 years but, recently, the attacks had become more frequent and more severe. There was no family history of migraine. Neurologic examination indicated disorientation in time and place, right homonymous hemianopia, and gait ataxia.

He was treated with analgesics and antiemetics and recovered fully within 24 hours. At the time of presentation, several tests were performed. It appears from how the history was written that test results were available after the patient responded to the pharmaceutical intervention. Visual evoked potentials and CSF examination was normal. However, blood tests showed positive IgG and IgA antigliadin antibodies. A CT scan showed diffuse hypodensity within the white matter. An MRI showed extensive high signal lesions in the periventricular white matter of both hemispheres with further abnormalities in the internal and external capsules, the basal ganglia, the left thalamus, and the pons.

A few weeks later, he developed intermittent diarrhea and pale stools. The duodenal biopsy was abnormal. His HLA genotype was DQ2, which is consistent with celiac patients. The patient started a gluten-free diet and, within two weeks, his balance improved rapidly, and his headaches resolved completely.

Two years later, he reported intermittent headaches that were similar to, but less severe than, those he experienced previously. A diet history revealed poor compliance with a gluten-free diet. A repeat MRI scan a year after poor compliance showed progression of the brain abnormalities with changes in the right thalamus. At the time the case history was published, the patient was on a strict gluten-free diet and was free of headaches.

We docs and our patients need to embrace the fact that grains are the only food that contain gluten, and no other natural food (fruits, vegetables, nuts, or animal products) has ever been implicated as the primary cause of so many conditions. Grains also contain lectins that possess potent pro-inflammatory properties, which makes grains the worst food to consume as a staple. If one must have grains/grain products, condiment size portions are best, and rice is likely to be one of the better choices.

Fruits and vegetables are two foods that are universally accepted as health-promoting and disease-preventing. So, it is a grave mistake to consume grains in the place of fruits and vegetables. Loren Cordain, Ph.D., has written an excellent review article on the pro-inflammatory nature of grains.4 It is an article that all should read who are looking for details regarding the dark side of grains.

My impression, at this point, is that we need to eliminate or drastically reduce our grain intake, and replace grains with fruits and vegetables. Additionally, I would suggest taking a multivitamin, magnesium, fish oil, coenzyme Q10, lipoic acid, ginger/turmeric, garlic, and probiotics.

Dr. Seaman is the Clinical Chiropractic Consultant for Anabolic Laboratories, one of the first supplement manufacturers to service the chiropractic profession. He is on the postgraduate faculties of several chiropractic colleges, providing nutrition seminars that focus on the needs of the chiropractic patient. He is also a faculty member at Palmer College of Chiropractic Florida, where he teaches nutrition and subluxation theories. He can be reached by e-mail at [email protected]