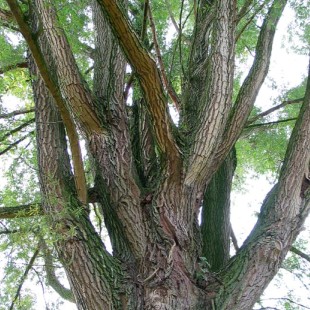 :dropcap_open:L:dropcap_close:ong before there was aspirin, there was white willow bark. Records suggest that, as far back as 6000 years ago, white willow was used in Mesopotamia. Subsequently, multiple ancient peoples recorded the use of white willow to cure pain and inflammation, including the Assyrian, Babylonian, Sumerian, Egyptian, Chinese, Greek and Roman civilizations.1

Hippocrates (460–370 BC) recommended chewing willow bark to patients suffering from fever, inflammation, and pain. He also prescribed a brew of willow leaves to ease the excruciating pains of childbirth.1  Since that time, white willow has continued to be used to ease pain and inflammation.

Interest in the chemical properties of willow bark led chemists in the early 1800’s to identify a therapeutically active component that was named salicin. It was then determined that salicin consisted of a glucose molecule attached to a salicyl alcohol called saligenin. Oxidation of salicyl alcohol led to the synthesis of salicylic acid, which was found to be a gut irritant. Salicylic acid was acetylated and converted into the less irritating acetyl salicylic acid, which was registered by the Bayer Company Aspirin in 1899.1

During the period when chemists learned to convert salicin into acetylsalicylic acid, an article was published in the Lancet, in 1876, entitled “The treatment of rheumatism by salicin and salicylic acid.”2 The paper describes how patients were treated with salicin/salicylate, which resulted in a complete reduction of fever and joint pain/inflammation.

After the development of aspirin and other nonsteroidal anti-inflammatory drugs (NSAIDs), little attention was given to white willow. More recently, a greater interest in white willow as an alternative NSAID is emerging.

A Modern View of White Willow

Patients who regularly take NSAID’s for pain and inflammation are at risk for developing gut ulceration. Indeed, next to H. pylori infection, NSAID’s are the most common cause of peptic ulcers. In this context, a key benefit is that the adverse effects of taking white willow are the same as placebo;3 however, white willow may also be as effective as NSAID’s. In one study, when white willow was compared to Vioxx, pain reduction was identical in each group; however, there were less side effects in those taking willow  bark.4

In 2007, the Annals of Internal Medicine published a joint clinical practice guideline for the treatment of acute low back pain that was developed by the American Pain Society and the American College of Physicians.5 They concluded that the level of evidence supporting the use of white willow was fair and the net benefit was moderate, which is the same benefit as acetaminophen, NSAID’s, and muscle relaxants.

For patients taking over-the-counter NSAID’s who wish to avoid gastric complications, switching to white willow bark may be a good option. Adopting anti-inflammatory eating habits to reduce the reliance on NSAID’s is also an appropriate step.6

Dr. Seaman is a Professor of Clinical Sciences at the NUHS branch campus at St. Petersburg College, Florida. He is also a Clinical Consultant for Anabolic Laboratories. He has written numerous articles on the treatment options for chronic pain patients, with a focus on nutritional management. He can be reached at deﬂ[email protected]ﬂame.com.

4. Chrubasik S, Kunzel O, Model A, Conradt C, Black A. Treatment of low back pain with a herbal or synthetic anti-rheumatic: a randomized controlled study. Willow bark extract for low back pain. Rheumatology. 2001;40(12):1388-93.

6. Seaman DR. The diet-induced proinflammatory state: a cause of chronic pain and other degenerative diseases? J Manipulative Physiol Ther. 2002;25:168-79.