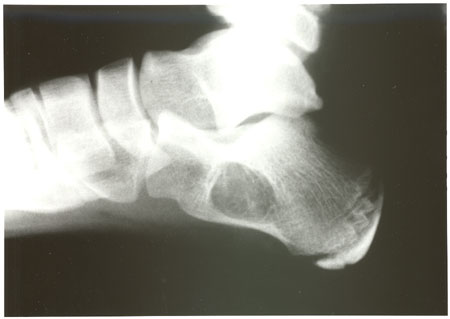 This active adolescent athlete sprained his foot while playing tennis.  Radiographs revealed a large radiolucent lesion in the calcaneus.  What is this?

The geographic lytic expansile lesion in the floor of the calcaneus is well circumscribed and has all the characteristic appearances of a benign lesion.  Benign lytic lesions of the calcaneus are most commonly simple bone cysts (unicameral); however, the possibility of an aneurysmal bone cyst, giant cell tumor, or other benign tumors cannot be ruled out.

Simple bone cyst (SBC), sometimes referred to as a unicameral bone cyst (UBC), solitary bone cyst, or juvenile bone cyst, is not a true neoplasm of bone, but rather a fluid-filled cyst that is lined with a thin layer of fibrous tissue.  Nonetheless, it is frequently classified under the heading of primary bone tumors.  Jaffe and Lichtenstein1, who described the first cases in 1942, clearly delineated this cyst as a distinct disease entity, naming it unicameral bone cyst.  The term unicameral, meaning one house, has actually created some confusion, since many lesions present with a bubbly or chambered appearance; it is not single chambered at all.  All of the cases that Jaffe and Lichtenstein originally reported were of the single-chamber cystic variety, which led them to use the term unicameral initially.  However, many multichambered lesions have been reported since, which are better termed simple bone cysts rather than unicameral.  In fact, histologically, they are the same lesion.

SBC’s represent slightly more than 3% of biopsied primary bone tumors.2
An SBC most commonly occurs between the ages of 3 and 14 years (80% of cases).  They have been reported in a 2-month-old infant3, and in patients over 50.3  Males predominate, 2:1.

The traditional treatment of choice has been surgical curettage with cauterization of the cyst.  Packing of the hollow cavity with bone chips following surgery is necessary.  However, recurrence rates with this technique have been high, approximately 30 to 40%.7   More recently, the injection of steroids has significantly reduced the recurrence rates, thus providing effective treatment for the cyst.5,8-11