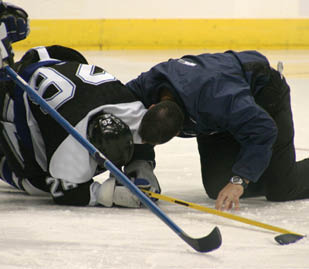 History and Presenting Symptoms
The patient, a 24-year-old male semi-professional hockey player, reports a recent right hamstring “grab” that just does not seem to be improving. His history includes several injuries to the same hamstring muscle during his collegiate playing career with mixed attempts to stretch and rehab. He also describes varying levels of pain in his lower back and left hip region, which has led him to ask for a complete musculoskeletal evaluation.
Exam Findings

Vitals.  This athletic young male weighs 175 pounds, which at 5’11’’ results in a BMI of 24.4: He is not overweight. He is a non-smoker, does not drink alcohol, and his blood pressure and pulse rate are at the lower end of the normal range.
Posture and gait. Standing postural evaluation finds relatively good alignment with intact spinal curves but a slightly lower iliac crest on the right along with a lower-right greater trochanter. His spine appears to be well balanced above with no evidence of lateral curve or list. He also demonstrates right calcaneal eversion and a low medial arch (hyperpronation). A tendency to toe out on the right is seen during a standard gait screening, and he confirms his need to be conscious of the positioning of his right foot when skating.
Chiropractic evaluation.  Motion palpation identifies a mild limitation in left sacroiliac motion with moderate tenderness and loss of endrange mobility. Compensatory fixations are identified at L4/5 and L2/3. Otherwise, all orthopedic and neurological testing is negative.
Primary complaint.  Examination of his right lower extremity finds tenderness to palpation at the ischial insertion and in the medial belly of the hamstring muscle group. Straight leg raise is limited to 58° by hamstring tightness and pain, and active knee extension is restricted when the hip is placed in 90° of flexion. Manual muscle testing finds painful weakness in the right hamstring when only moderate resistance is provided.
Imaging
Because of his history of recurrent strains and the evidence for postural asymmetry, an upright lumbopelvic series is obtained. The standing AP lumbopelvic view shows a lateral pelvic tilt, a low sacral base on the right, and the right femur head is five millimeters lower.
Clinical Impression
Hamstring muscle injury associated with chronic biomechanical strain. A functional short leg on the right is accompanied by sacroiliac joint motion restriction and compensatory lumbar fixations.
Treatment Plan
Adjustments.  Specific, corrective adjustments for the SI joints and lumbar region were provided as needed. Mobilization and manipulation were performed on his right arch, calcaneus, and navicular bone.
Support.  Individually designed stabilizing orthotics were ordered for his street shoes, and a second pair was fitted into his hockey skates. They were designed to support the arches, decrease calcaneal eversion, and reduce the asymmetrical biomechanical forces being transmitted to the spine and pelvis.

Rehabilitation.  He was initially instructed to perform sustained functional hamstring stretches four times a day. After one week, daily strengthening exercises for the right hamstring were progressed from light to strenuous resistance using elastic exercise tubing.

Response to Care
The spinal and pelvic adjustments were well tolerated, and once he began wearing the stabilizing orthotics, this active hockey player required very few re-adjustments. His compliance with the recommended exercises was excellent because he was quite motivated to improve his performance and to prevent future hamstring injuries. He was immediately able to wear his orthotics full time and reported an improved sense of edging and control in his skates. The right hamstring muscle regained full flexibility and balanced strength, and he was released from acute care to a self-directed home stretching and sports performance program after a total of eight visits over two months.
Discussion
While a hamstring muscle “grab” or “pull” is often just a simple strain injury, in some cases there is an underlying biomechanical fault that makes it recurrent. Careful evaluation of the patient’s spine and lower extremities identified the asymmetry in the feet and ankles as a major contributor to his symptoms. Fitting stabilizing orthotics into his skates helped to provide a better boot fit, improved his edge control, and enhanced long-term support for his lower extremities. As with this young man, athletes at all levels appreciate a thorough evaluation and advice that can help to improve sports performance.