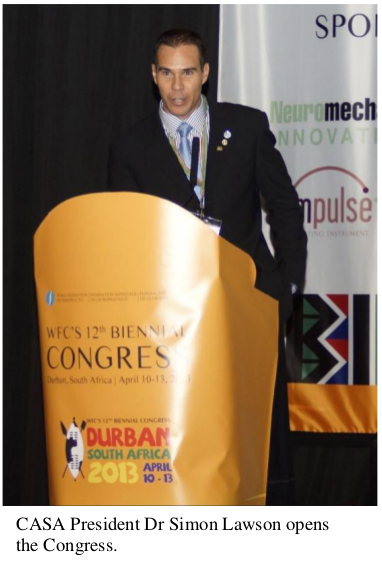 From April 8–13 the Chiropractic Association of South Africa (CASA) hosted the World Federation of Chiropractic’s 12th Biennial Congress, titled Chiropractic Under the African Sun, at the International Convention Center in Durban, South Africa.
More than 750 delegates from 42 countries attended the Congress, the largest and most impressive meeting ever held in Africa. Many rated it “the best ever” chiropractic event in their lives.
“This was a wonderful Congress in very, very many respects”, said Dr Bill Meeker, President, West Campus Palmer College, which was one of the major sponsors together with Neuromechanical Innovations and Foot Levelers.
Beyond outstanding academic and social programs there were many special celebrations and events since this was the Silver Anniversary of the WFC which was formed 25 years ago in 1988. These included:

One important goal of holding this WFC Congress in Africa was formation of a regional organization to represent and advance the chiropractic profession in Africa, the only world region without such a regional organization. That was achieved with the formation of the African Chiropractic Federation (ACF) at the WFC Assembly by chiropractic delegates from 13 nations – Botswana, Congo, Ethiopia, Ghana, Kenya, Liberia, Mauritius, Mozambique, Namibia, Nigeria, South Africa, Uganda and Zimbabwe.

The first ACF seminar meeting is to be held in Nairobi, Kenya from April 3-5, 2014, hosted by the Chiropractic Association of Kenya.
“Our Silver Anniversary Congress was such a success because of many partners and individuals,” said WFC President Dr Dennis Richards of Australia, “but none more so that the members of the CASA Local Planning Committee led by Dr Caileen Walker and Dr Reg Engelbrecht. The WFC and everyone who attended this historic meeting are greatly indebted to them.”
Special thanks are also due to many exhibitors and sponsors, led by Platinum Sponsor Neuromechanical Innovations (Dr Christopher Colloca, President). Many of these donated prizes to a fundraising raffle which raised over $5,000 to support the inspirational work of Sister Brigitte Yengo DC, MD at her orphanage at Brazzaville in the Congo (www.SisterYengo’sChildren.org).
The next WFC Congress is to be held in Athens, Greece from May 14-16, 2015, together with the annual convention of the ECU and hosted by the Hellenic Chiropractic Association. WFC member associations in the Asia and Pacific Regions are being invited to bid to host the 2017 Congress.