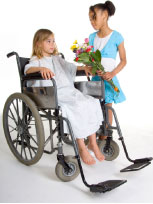 Doctors of Chiropractic frequently encounter patients who have lost the ability to ambulate properly due to a fall, accident, or neurological disease. This is especially tragic when the patient is an adolescent. This case history reviews the protocols used in the case of an 11- year-old female injured in a vehicular accident.

Carmelena was a healthy, athletic young girl who loved gymnastics and soccer. At age 8, her life was drastically changed. As she was crossing the street, she was hit and dragged by a car. She suffered multiple contusions, a lacerated liver, injury to the brain, and a torn aorta. Following the accident, she was hospitalized for over 10 months. Multiple surgeries and attempts at rehabilitation followed. After extensive care and physical therapy, the doctors informed the parents that Carmelena would be an invalid for the rest of her life. She could not walk, could not talk and her sight was gone.

Initial Contact Reflex Analysis (CRAÂ®) examination revealed a morose 8-year-old, confined to a wheel chair. She was non-responsive to verbal commands and, although her pupils reacted to light stimuli, was unable to see. Ambulation was virtually impossible and had been since the accident. Her parents sought out alternative care after the medical professionals advised them there was nothing that could be done. What they basically told the parents was that Carmelena would be an invalid, bed-ridden for life.

An examination of the spine and extremities revealed a lack of ranges of motion in her right arm and the lower extremities. Spinal rigidity was present and multiple fixations were noted in the cervical, thoracic and lumbar regions. The patient was unable to speak and the child was apparently unable to see. It was decided that further testing and management with Contact Reflex AnalysisÂ® might offer this patient the greatest hope for success.

Analysis using CRAÂ® protocols developed by D. A. Versendaal, D.C., was undertaken. Mechanical, emotional, and chemical (i.e., nutritional) imbalances were evaluated via a review of the major CRA reflex points. This evaluation revealed reflex imbalances in the reflexes related to the brain and brain stem and in the visual reflex.

Consequent to the evaluation, the patient was adjusted in the cervical and thoracic regions. It was suggested that the patient take whole food nutritionals specifically directed toward the brain and brain stem and to effect vision. Energy technologies were also recommended, again based on CRA protocols.

Within weeks, the patient began to ambulate and was soon able to get out of her wheelchair. Soon after she began care, the patientâs teachers reported that she cried out in school, “I can see.” She was able to see light and vague shapes for the first time since her accident. Articulation was restored within weeks and she was able to walk within six months. She continues under care.

Contact Reflex Analysis was developed by Dick Versendaal, D.C., more than 40 years ago. Based on Palmerâs belief that dis-ease can be caused by emotional, nutritional, and/or structural imbalances in the body, CRA is an energy technique that combines chiropractic adjustive procedures, nutritional science, and breakthrough SRTÂ® in an effort to bring the body into homeostasis. CRA relies on testing of specific reflex points located on the front of the body using a pulsing procedure that identifies areas of energy imbalance at the reflex points (e.g., the heart reflex) that, in turn, are related body function.

This remarkable improvement in the patientâs condition was amazing to the medical practitioners and a “miracle” to the family. Although she continues under care, everyone is very positive about her continued improvement. CRA offers hope for many patients who have been unable to see results with allopathic or even other alternative forms of care. CRAâs incorporation of a systematic analytical evaluation followed by chiropractic adjustments, sound nutrition, and energy therapies offer the patient a very strong protocol for health restoration.

Dr. Paul A. Jaskoviak is currently serving as Academic Dean for Shepherdâs Care Bible College. He was formerly President of the CRA and Nutritional Research Foundation and has been working with Dr. Versendaal for about 20 years. He and his family currently reside in Camas, Washington. Jaskoviak was previously employed by both the National College of Chiropractic and Parker College. He also served for a time as Editor of The American Chiropractor Magazine. For more information, contact CRA Wellness at 1-616-669-5534 or visit the website www.CRAwellness.com.