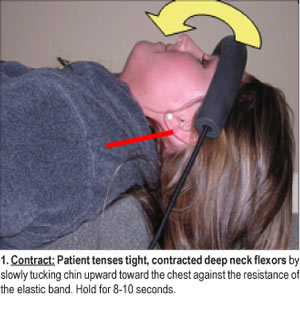 Maybe you should try a little C.R.A.C. No…I’m not recommending you seek solace in some vicious street drug. Instead, you might want to try combining a well accepted muscle stretching technique with extension traction to speed up the corrective process. Here’s how it works.

The acronym C.R.A.C. (Contract-Relax-Antagonist Contract) normally refers to an effective method of assisted stretching. The method has a simple three-step sequence in which the patient is instructed to;

Here’s how I have used the C.R.A.C. method in combination with the Dakota Traction. The patient is first positioned properly on the fulcrum with the head free-hanging and the headband in place over the forehead. Tip: I prefer patients to have already been using the Dakota Traction for a week or two, just to make sure they can tolerate the extension traction process without undue discomfort.

During the first few minutes of each traction session, patients are instructed to perform the following movements to initiate the C.R.A.C. sequence.

I typically instruct patients to repeat the entire sequence six to eight times and then simply relax for their full traction session of 20-30 minutes (or according to their tolerance).

The method works by virtue of Sherrington’s Law of reciprocal inhibition, in which the taut/contracted flexors are “tricked” into relaxing by contracting the extensors. C.R.A.C. stretching has been around for a long time and appears to be a very effective way to lengthen taut or shortened musculature. Years ago, I began experimenting with combining the C.R.A.C. method of inducing muscular relaxation with various types of cervical extension traction. My idea was that, if the patient’s loss of cervical lordosis was primarily due to contracted musculature on the anterior neck, it might be possible to speed up the process of correcting the lordosis by incorporating more efficient ways of addressing the taut musculature. My results were very encouraging. I found that some (not all) patients were achieving dramatic corrections, with just five-minute applications that would have normally taken months to accomplish.

Those poor souls who have followed my columns so far may recall that I am always emphasizing the importance of applying sustained corrective forces for 20-30 minutes daily over a period of three or four months in order to correct the lordosis. Yet here were some patients getting phenomenal corrections in a fraction of the time. As it turns out, the sustained periods of loading, so vital to stretch non contractile tissues, aren’t necessarily the quickest way to stretch contracted musculature. C.R.A.C. traction can offer a practical way to speed up the process when you suspect muscle to be the primary tissue perpetuating your patient’s poor posture. My results were very encouraging. Although there is no published research on this particular combination, both methods are safe and effective. Using them in tandem is safe, logical and, best of all, won’t cost you a penny extra to try.

My personal experience with the method is that about 25-30 percent of patients will show VERY rapid corrections with C.R.A.C. traction. Those patients who are responding well will often exhibit dramatic changes in their forward head posture within just a week or two as opposed to the normal 10-12 weeks we would anticipate in most cases. In my experience, these changes in forward head posture always correlated well with improvement of the lordosis upon re-X-ray. It seems intuitive that these rapid responders must have a fairly significant muscular component as a perpetuating factor of their abnormal head postures.

And what about those who don’t respond? They just continue to progress in the slow and steady manner we have come to expect when applying corrective traction. Most likely, these non responders are those patients with a greater degree of non contractile tissue adaptation and will respond as usual to the long term application of sustained traction force. No doubt, many patients actually have postural adaptation of both muscular and non contractile tissues to varying degrees. With this in mind, and because there is really no downside to the method, I often incorporate the C.R.A.C. sequence with my extension traction methods to help remove any muscular resistance as quickly as possible. If you’ve been frustrated with long corrective care programs, I suggest you just try a little C.R.A.C. You’ll be feeling better in a week or two.

Dr. Mark Payne is the president of Matlin Mfg., a manufacturer and distributor of postural rehab products since 1988. To request more information on postural chiropractic methods, call 1-334-448-1210 or link to www.MatlinMfg.com.