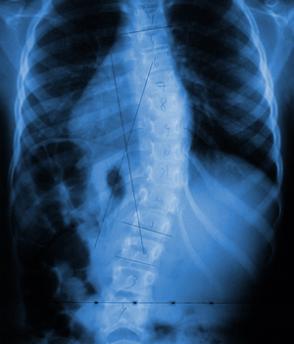 Now that genetic pre-disposition testing for scoliosis progression risk is available, An Early Stage Intervention Program has also been developed to provide scoliosis patients a non-bracing, non-surgical treatment option that allows them to take immediate action in the prevention of the next stage of the standard treatment process.

The three medically-sanctioned methods of scoliosis treatment—observation, bracing, and surgery—have been around for decades. A great deal of research has been done on the risks and benefits of each option. However, the general conclusion of this research suggests that a new paradigm is desperately needed, as there are many conflicts and inadequacies present in the current model.

Observation Only or the “Watch & Wait” Stage

Once an individual has been diagnosed with scoliosis, no treatment is initially prescribed, and no action is immediately taken, until the cobb angle has progressed to 25 degrees.  At this point, bracing is typically prescribed. This period, which is termed “watch & wait,” consists only of regular visits to an orthopedic.

If there ever was a time when a patient could benefit most greatly from chiropractic, therapeutic exercise, or non-surgical intervention, it would undoubtedly be during the mild stages of the disease—before the muscles and tissues of the body have been deformed by months or even years of compensating for the abnormal twisting and bending of the spine.

Bracing dates back to approximately 650 AD, when Paul of Aegina suggested bandaging scoliosis patients with wooden strips. The first metal brace was developed by Ambroise Pare in the 16th century. Today, there is a bewildering assortment of braces in use, ranging from the venerable and bulky Milwaukee brace, to the traditional TLSO braces such as the Boston and the Wilmington brace. There are “part-time” braces, designed to be worn at night: the Providence brace, and the Charleston brace. There are also “dynamic corrective braces” (SpinCor), which may use soft, elastic materials and claim to be able to do more than simply stabilize the progression of scoliosis.

This dizzying variety is further complicated by the fact that not every doctor prescribes the braces to be used in the same manner, and not every patient may follow their doctor’s recommendations to the same extent. As a result, research is often conflicting in regard to the true effectiveness of bracing in scoliosis treatment. Some studies have shown very little difference between patients who wore the brace for the prescribed time.  In every case, all corrective benefit is lost very quickly once the patient stops wearing the brace.

Those patients for whom bracing fails to prevent the progression of their scoliosis are left with only one option: surgery. Those who are confronted with this choice may be told that having a metal rod fused to their spine will not impair their daily activities, and will reduce the rib arch and improve their cosmetic appearance. However, research has consistently shown that surgery—which primarily focuses upon the sideways bending, and does little to address the rotation of the spine (and hence the rib protrusion)—will actually cause the rib arch to worsen (Chen 2002, Goldberg 2003, Hill 2002, Pratt 2001, Weatherly 1980, Wood 1991, Wood 1997).

The rate of hardware failure is virtually 100% over the course of a normal lifetime. It may occur immediately after the surgery or several years later, but one or more components of the hardware placed inside the body is highly likely to fail or break. The author of one study stated, “One would expect that, if the patient lives long enough, rod breakage will be a virtual certainty”. Another study found that, amongst seventy-four patients who underwent the surgery, failed fusion occurred in 27% of patients within a few years after the procedure.

The truth of the matter is that scoliosis is an abnormality of the spine which involves much more than merely a sideways curve. Yet the “effectiveness” of surgery is measured only by the degree to which it can reduce the lateral deviation through the application of brute force, and a fused spine is every bit as abnormal and dysfunctional as a scoliotic spine.

We can alter the natural course of this disease by identifying which patients are at the highest risk for severe progression via genetic testing (Scoliscore) and by implementing an aggressive, non-invasive Early Stage Scoliosis Intervention program that re-trains the brain’s involuntary postural controls centers before the spinal curvature reaches the 30 degree “buckling” point.

Dr. A. Joshua Woggon, a 2010 Graduate of Parker College, is the Clinic Director  of the CLEAR Scoliosis Treatment and Research Clinic on the campus of Parker College of Chiropractic in Dallas, Texas (www.clearscoliosisclinic.com), and the Director of Research for CLEAR Institute, a Non-Profit Organization dedicated to advancing chiropractic scoliosis correction (www.clear-institute.org).  He can be contacted at [email protected]