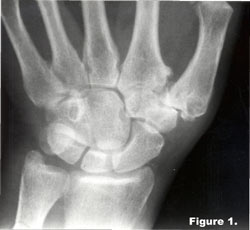 History: This female patient complains of pain at the base of her thumb. An X-ray reveals what?

Diagnosis: Observe the sclerosis and osteophytes at the base of the first metacarpal, which represents erosive osteoarthritis. Of incidental notation is congenital fusion of the capitate and the hamate (carpal coalition).

This is a distinctive clinical and radiographic variant of degenerative joint disease first delineated by Crain in 1961. The two most common terms applied to this arthropathy are erosive osteoarthritis and inflammatory osteoarthritis.1

In contrast to primary degenerative joint disease, the onset of erosive osteoarthritis is characterized by episodic and acute inflammation of the distal and proximal interphalangeal joints of both hands in a symmetric manner. Pain, edema, redness, nodules and restricted motion are found at the involved articulations of the hands. This arthropathy is most commonly found in middle-aged females in the fourth or fifth decades of life. Laboratory investigations are inconclusive, with normal to slightly elevated erythrocyte sedimentation rate and negative rheumatoid factor. Chronic progression of the disease is to be expected with nodular, unstable and malaligned finger joints. The intensity of symptoms with each inflammatory episode may continue to be severe for many years. Approximately 15 percent may develop rheumatoid arthritis, with an average onset of twelve years after the initial episode of erosive osteoarthritis.1

Essentially, the radiographic changes are those of degenerative joint disease with superimposed bone erosions predominately involving the distal and proximal interphalangeal joints. Occasional involvement of the thumb at the metacarpophalangeal and carpometacarpal joints may occur, as well as between the trapezium and scaphoid articulations. Involvement of the ulnar compartment of the carpus is significantly spared, differentiating involvement from rheumatoid arthritis. All other joints of the body are generally uninvolved.1

Radiographic changes are characterized by osteophytes, loss of joint space and sclerosis. Osteophytes are identical to those seen in degenerative joint disease. They are marginal in origin, taper distally, and are often larger at the distal articular component. Loss of joint space is usually non-uniform, with adjacent subchondral sclerosis. Superimposed changes of erosions, periostitis and ankylosis on these degenerative features are characteristic of erosive osteoarthritis. Bone erosions are distinctively centrally located on the proximal articular surface and more peripherally at the distal articular surface. The resultant altered joint surface contour has been called the “gull wings” sign. Adjacent linear periostitis is occasionally seen. Bony ankylosis is an uncommon but not unexpected sequel of one or more interphalangeal joints.1