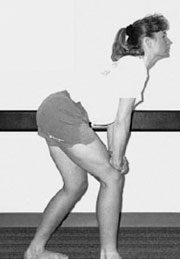 :dropcap_open:A:dropcap_close:n interesting study has found that there is a more effective way to stretch the hamstring muscles.1 The new procedure is easy to teach to patients, and can be done anywhere and just about anytime. Unlike some forms of hamstring stretching, it does not require an assistant or any special equipment to achieve significant improvement in flexibility. The new stretch is termed a “stance phase” stretch for the hamstring, contrasting this method with all others that position the leg in the forward swing phase during the stretch period. It is also a “closed-chain” stretch, while all other hamstring stretches use an “open-chain” position. An example of an open-chain stretch is the commonly used Standing Hamstring Stretch, with the upper body bent forward over the outstretched leg.

In this new hamstring stretch, the subject starts in the standing position, and then takes a short step forward with the leg to be stretched. Both hands are placed on the forward knee, both knees are bent slightly, and the pelvis is then tilted forward while the lumbar spine extends. (The forward tilt of the pelvis places the hamstring in a “pre-stretch”.) While maintaining lumbar extension, the subject bends forward at the hip until the hamstring muscle tightens. The stretch is accentuated further by slowly extending the forward knee. The stretch is held at tension for thirty seconds, and then the leg positions are reversed. Each leg is stretched five times. One set of these stretches was done five days a week for a period of two weeks (a total of ten five-minute stretching sessions). The investigators reported that “evaluation of the data indicated that the stance phase stretch was significantly more effective at increasing hamstring flexibility than the forward swing phase stretches.”

The beauty of this method for stretching the hamstrings (besides the rapid improvement in flexibility experienced by the patient) is that the joints, muscles, and connective tissues all are bearing weight during the exercise. The foot and ankle are in the stance phase, when the hamstring will be most active. This provides a more specific active retraining of neuromotor patterns, thereby preparing all involved structures for more efficient daily activities.

Hamstring muscle imbalances often contribute to (or may be caused by) pelvic malpositions and spinal subluxations.2 And, other pre-existing muscle imbalances may contribute to chronic hamstring tightness and recurrent strains. The gluteus maximus muscle is often relatively weak, causing the hamstring to work harder to extend the hip joint. This may be found along with an iliopsoas muscle that is shortened or hypertonic on the same side. The tightness of the iliopsoas inhibits the gluteus maximus, thereby placing the hamstring at a disadvantage.3

The hamstrings are most active during the last 25% of the swing phase of gait, and the first 50% of the stance phase.4 Since this initial 50% of stance phase consists of heel strike and maximum pronation, the hamstrings help to control the alignment of the knee and ankle and help absorb some of the impact. A study of runners found a significant decrease in electromyographic activity in the hamstrings when wearing orthotics.5 In fact, these investigators found that the biceps femoris had the greatest decrease in activity of all muscles tested, which included the tibialis anterior, the medial gastrocnemius, and the medial and lateral vastus muscles. The researchers theorized that the additional support from the orthotics helped the hamstrings control the position of the calcaneus and knee, and also absorb some of the shock of heel strike. Previous studies have also demonstrated significant decreases in tibial internal rotation6 and pronation velocity7 when using orthotics, which could also relieve some of the strain on the hamstring muscles.

This new stance-phase, closed-chain stretch is not only more effective, but it is easier to do than most other forms of hamstring stretching. That makes it more likely that our patients will actually do the stretch we have recommended, and get positive results. Comprehensive treatment of pelvis and lower spine problems should include an evaluation of the lower extremities and the hamstrings, in particular. Stretching of tight hamstrings may be needed, along with orthotic support to stabilize rearfoot function. The electromyography investigations have shown that orthotics have a direct effect on the hamstring muscles.

John K. Hyland, D.C., M.P.H. D.A.C.B.R., D.A.B.C.O., C.S.C.S., C.H.E.S. is board-certified in two chiropractic specialties, and is also certified as a Strength and Conditioning Specialist and a Health Education Specialist. He has 20 years of clinical practice; for eight years he specialized in chiropractic rehabilitation. He is currently a Research Associate at Parker College of Chiropractic, and an Adjunct Professor of Clinical Sciences at the University of Bridgeport’s College of Chiropractic. You can contact him at [email protected].