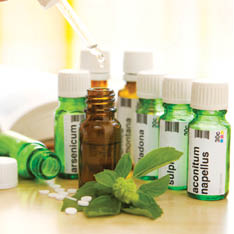 :dropcap_open:S:dropcap_close:upported by new research studies, homeopathy is rapidly becoming one of the most sought-after therapies for sports injuries. Athletes who are looking for reliable treatments without unwanted side effects are requesting homeopathic care, and chiropractors are often the best professionals to offer this service. Both weekend warriors and professional athletes trust that DCs will only recommend therapies that have no side effects and that will get them back to their crucial training schedules in the shortest time possible. They know that spinal manipulations and individually prescribed exercises increase their performance. What is increasingly apparent is that their chiropractic care can be even more effective when coupled with homeopathy.

Chiropractors who integrate homeopathy into their treatment plans are reporting increased patient satisfaction, more frequent referrals of friends, family members and teammates, and improved patient compliance. These DCs experience a reduction in the stress brought on by the challenges of complicated sports injuries and a significant growth in practice revenue brought on by increased patient visits and by the sale of the homeopathic medicines themselves.
Where to Begin: Topical Salves and Gels
One of the best-researched homeopathic medicines is Arnica montana. Available in both topical and oral forms, Arnica can be used for strains, contusions and muscle soreness. Although putting topical Arnica into open wounds must be avoided, the gel or cream can be applied to speed the healing of aching muscles following unaccustomed exertion or extreme exercise. Applied twice daily, it will provide relief for patients with muscle sprains and strains. It will also reduce healing time and minimize pain in athletes with fractures once the bone has been set and cast. For the best outcomes, apply as soon after injury as possible.
Zell and Bohmer’s double-blind studies (in 1989 and 1992) were two of the earliest research papers to reveal the effectiveness of topical Arnica applications in treating sprains and strains.¹-² Porozov and Chalon’s 2004 studies confirmed this when their report revealed the ability of Arnica products to affect the behavior of immune cells, inhibiting those that lead to inflammation and tissue damage. (Most of the pro-inflammatory agents were reduced by 54–70 percent.) ³
More recently, Schneider, Klein, and Stolt’s observational study compared the use of an Arnica-based ointment with a conventional drug, diclofenac gel (marketed more commonly as Voltaren and Dicloflex). Of the 357 patients included in the study, some received homeopathic treatment, while the rest received conventional care. Patients from both groups exhibited similar improvement, but those who received homeopathic care reported superior benefits and reduced pain from motion.4
Oral Homeopathics for Sprains, Strains, Surgical Injury and Fracture
The anti-inflammatory effects of Arnica can be seen even more clearly when patients are administered the homeopathic medicine orally. Dr. Roger Morrison, international lecturer and author of three medical texts, writes: “Arnica accomplishes miracles in both acute and chronic conditions. In injuries, Arnica is most useful when there has been extravasation of blood. Therefore, it is especially useful in contusions, sprains or after surgical trauma when there is bruising.”5 A  2005 study illustrates this: Three randomized, placebo-controlled, double-blind, sequential clinical trials were conducted in a primary-care unit specializing in knee surgery (Schneider, Klein, Stolt, 2005). Patients were given Arnica 30X or a placebo before and after one of three different treatments: arthroscopy, artificial knee -joint implantation,or cruciate-ligament reconstruction. In all three trials, patients receiving oral doses of Arnica showed a trend towards less swelling. Patients with cruciate-ligament reconstruction experienced the most significant difference.
:dropcap_open:In all three trials, patients receiving oral doses of Arnica showed a trend towards less swelling.:quoteleft_close:
When prescribed for the trauma of surgery, patients take two to three pellets of the 12C or 30C potency before the procedure. After surgery, they follow up with two to three pellets of Arnica twice daily for up to seven days to lessen pain, swelling and bruising. Once improvement is noted, the patient is advised to stop taking the medication unless symptoms return.
Morrison goes on to describe other conditions that show improvement after treatment with Arnica: concussions following head-on collision, black eyes, epistaxis from blows to the nose, acute sprains with extravasation and soreness, muscle or tendon injuries after prolonged or unaccustomed exertion, and ecchymosis and pain following fracture. He recommends Symphytum as a follow up for the healing of broken bones. This medicine is derived from Comphrey, an herb called “knit bone” by the Native Americans who used it. After an initial day of Arnica to lessen bruising and pain, Symphytum is given to increase the formation of osteoblasts and to help “knit” the bone tissue together. It is prescribed in the 6C or 30C form four times daily for a week and then once weekly until full healing is documented by X-ray examination.
Rapid Treatment of Leg Cramps
For all that Arnica can do, there are other effective homeopathic medicines for cramping muscles. For athletes whose musculature responds to warm applications, the homeopathic medicine Magnesium phosphoricum will provide swifter reliefFor those who have muscles in the calf or sole of the foot that repeatedly spasm, Cuprum metallicum will be more useful. Prescribed in the 6C or 30C dilution levels, the athlete should feel immediate relief and be able to return to his or her workout or competition without worry.
Getting Psyched for the Game
As sports competitions get more extreme and training becomes fiercer, athletes do not just want to be physically fit, they want to be at their peak emotionally as well. For this the chiropractor can turn to several different homeopathic medicines that restore a sense of calm and equilibrium. Gelsemium sempervirens will bolster the timid athlete who reports a weak stomach or jittery knees before competition. Used for years by performers before entering the stage and by executives before proposing major business deals, Gelsemium can be recommended by chiropractors to athletes who get weak in the knees before the starting gun goes off. Chiropractors can prescribe Nux vomica to the competitive “Type A” athlete who is irritable and on edge and needs to “chill out” before climbing onto the racing block. For the intense, idealistic competitor who can only be “the very best,” setting impossibly high goals to obtain, there is Aurum metallicum, a homeopathic medicine that is also known for its ability to heal headaches that come on after experiencing loss or failure.

Jonathan Davidson, M.D., conducted some of the first tests that revealed the usefulness of homeopathic medicines in treating anxiety, panic, and depression.6 Mathie and Robinson and 14 physicians in the UK followed up Davidson’s work at Duke University. There, too, homeopathy showed positive outcomes for the majority of patients (~75.9 percent) with a range of emotional issues including anxiety and depression.7
The Time is Ripe to Jump on Board
The soccer star David Bekham used homeopathy for his broken foot before competing in the World Cup. James Ellingon, the British Olympic sprinter, used homeopathy for muscle and joint pain before his competitions. Skaters Jayne Torvill and Elvis Stojko used homeopathy for their bruises. Paul O’Neill, former right fielder for the Yankees; Arnie Kander, strength and conditioning coach of the NBA Detroit Pistons; and Pat Riley, coach of the Miami Heat, are all homeopathy advocates. They recognize that homeopathic medicines speed up healing and get athletes back in training speedily and with no side effects.
This article presents some of the easiest medicines for a chiropractor to use in practice. With them DCs can improve their outcomes and offer their patients the care that will allow them to bring home the gold.
As both a homeopath and chiropractor, I have seen the effect of homeopathy in helping thousands of patients to overcome both physical and emotional illness in my New York City private practice of 30 years, as well as through my work as the Project Coordinator for Haiti with Homeopaths Without Borders NA in 2010. I have taught homeopathy to health professionals in countries as diverse as France, Kenya, Tanzania, and Trinidad. Since the 1980s, I have helped other chiropractors integrate homeopathy into their practice by developing curricula in homeopathy for chiropractic colleges, medical schools and teaching hospitals around the world, including Memorial Sloan Kettering Cancer Center, Columbia Presbyterian, and New York University Hospitals.
References

Dr. Lauri Grossman Dr. Lauri Grossman (www.homeopathycafe.com) is both a homeopath and chiropractor. She serves as Chair of the Department of Humanism at the American Medical College of Homeopathy and serves on their International Affairs Committee.