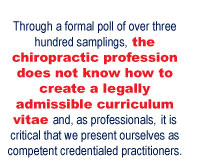 Most doctors in practice twenty-five to thirty years spend the first half of their practice figuring out what to do and the second half putting that knowledge into practice. Unfortunately, most still struggle with the same problems they had in the beginning, only accepting it as the norm. What most don’t figure out is that image and credentials in chiropractic equal success and that has less to do with what you are wearing and how your office appears than it does with how you present yourself as a professional through credentials.

First, your practice…. Many chiropractors, as I, began as family practitioners and, as the years progressed, become fascinated by caring for the trauma patient, as it is more challenging and can support your practice financially as most managed care programs are such low payers. Like most doctors, having personal injury cases in a family practice is part of the law of averages; if you treat enough patients, a certain percentage will get into a car accident or a slip and fall and will begin care with you, as you have gained their confidence as their doctor.

As an example, Dr. X’s practice was no different. As a result of caring for such a large number of patients per week, he had about twenty to twenty-five new personal injury cases per month, simply due to the law of averages and, subsequently, started recommending lawyers to those patients because he wanted his patients’ rights to be protected. Like most chiropractors, he cared personally for all of his patients. And so the journey began of working with the personal injury community. After a period of one to two years, he realized that he was sending a lot of patients to the legal community and never received any patients back in return. He didn’t ask; it just didn’t happen and, over time, he thought it odd.

Not being shy, he scheduled a meeting with many of the lawyers he was referring to, as he created a relationship with most of them and simply asked the question, “Why aren’t you sending me any patients in return?”

The answer was simple and powerful: his documentation was “deficient” and his credentials were “embarrassing.” Truthfully, those weren’t the exact words used, as the lawyers didn’t want to jeopardize their “golden goose.” However, that is what was said. The lawyers went on to tell him they always referred his patients to a different specialist before settlement or trial, so that they could secure “quality” paperwork from an appropriate and credentialed doctor.

After the meeting, he came away with the firm belief, as most chiropractors believe, that he wasn’t getting their referrals because he was a chiropractor and the lawyers all wanted medical doctors to represent their clients to the courts and insurance industry in settlement or litigation. The truth was it had nothing to do with any prejudice against chiropractic, just the documentation and credentials of that chiropractor!

This is a very common scenario for doctors nationwide. The presumptive solution for most chiropractors nationwide is to focus on creating better documentation, only to realize, in the end, it is not enough.

The reason is one of credentials. Lawyers explain, if they need to utilize the chiropractor as their expert, it comes down to credentials. Credentials, in the professional world, are your vital educational facts and professional experience demonstrated through your curriculum vitae, or a “CV.” Most chiropractors have very good resumes and have a good chance of being hired by Wal-Mart. Not a bad place to work but, for a doctor, having a great resume is akin to shooting yourself in both feet when working with the medical-legal community.

Peter Birzon, Esq., in New York, a former Federal Prosecutor and current health care lawyer, has used thousands of experts and explains that doctors’ curriculum vitaes should sound “nerdy.” He goes on to explain, a doctor‘s credentials should be explained in very technical terms listing locations, dates, degrees, post doctor education and organizational activities. Additional entries, such as references and purpose are resume builders and should never appear on a professional CV.

John Tierney, Esq., a New York based personal injury lawyer for over forty years explains that the legal community uses a doctor’s CV, first, for leverage in settling a case simply based upon the doctors credentials and, subsequently, for admissibility of testimony in a trial. He went further to explain that he will refer to doctors strictly based upon credentials as, without those credentials, he cannot prevail on a case. This fact has been confirmed with thousands of lawyers nationwide who consider the CV a vital component of the medical-legal relationship.

What does your CV look like? Does it represent the clinical excellence you practice? Does it have citations of coursework that certify you as an expert in an admissible format in your technique, in neurodiagnostics or advanced imaging? Your CV is a tool that will enable you to represent that you are an expert in the area of practice in which you desire to be successful.

Through a formal poll of over three hundred samplings, the chiropractic profession does not know how to create a legally admissible curriculum vitae and, as professionals, it is critical that we present ourselves as competent credentialed practitioners. The CV is the image we put out to the world regarding our credentials…and credentials are everything.

Medical doctors, as a community, while lacking in their ability to help similar conditions that we as chiropractors do, are taken more seriously by many facets of society, particularly those that regulate our profession. Look at the credentials of most medical doctors. Their credentials are impressive and in admissible format. As a result, medical doctors have been touted as a more learned group as a profession by both lawyers and legislators, alike, and that is problematic to both the chiropractic profession and the individual practice of chiropractic.

I was the past executive director (President) of my state organization and, after spending almost two decades in my state’s capitol working closely with legislators and regulators, the issue of credentials has risen numerous times.

Just last year in New York State, the physical therapists gained the right for limited direct access, a bill they have been fighting for over the last few years. According to Diana Georgia, Esq., former Legal Counsel to the New York State Higher Education Committee to the New York State Senate and, currently, an attorney working in the State’s Capital on legislative issues, the answer is one of credentials. The PT organization presented to the legislators a few PT’s with PhD’s in physical therapy, and they got what they sought: direct access. Ms. Georgia explained that numerous legislators voted for the bill solely based upon the “credentials of the profession.”

We, as chiropractors, have got to get our houses in order, both for our own practices and our profession. What do the legislators, lawyers and referral sources see in our credentials? I hope they haven’t looked too carefully at the masses…yet.

From a practice perspective, if you desire to have a personal injury practice, do you have the credentials on your CV of courses related to trauma? Do you have coursework on MRI interpretation or EMG/NCV interpretation? On triaging the injured or the effect of trauma on the spine? Do you have any course work on crash dynamics and, if so, is it listed on your CV in admissible format? These are the types of credentials needed for the legal community to have much of your documentation admitted into evidence or to prevail in settlement negotiations.

Lastly, has an attorney ever asked you for your CV? If not, then they do not take you seriously in the personal injury world and will not consider working with you if they have a choice. Once you have a great CV, then you are in the game and they will consider working with you. It’s not because you are not an MD; it’s because, through clinical excellence, they can prevail as you have formally documented that excellence on your CV.

How the world sees you as a professional will dictate the success of both your practice and chiropractic as a profession. Each of us must have his/her credentials reflect our expertise and training as the expert in our specialty, as that is how the world will judge us. The easy part is getting patients well; but, as a profession, we must take the next step.

Mark Studin D.C., F.A.S.B.E. (C), D.A.A.P.M., is the President of the “Lawyer’s Marketing Program” and can be found at www.cmcsmanagement.com. He also is the creator of the PI Bootcamp, a 9-CE credit course on building huge PI practices through “Clinical Excellence.” He can be reached at [email protected]