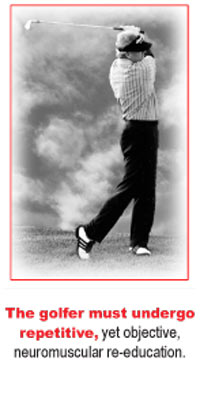 Golfers want to hit big, powerful drives. With the new generation of strong, athletic golfers in the PGA (Professional Golfers’ Association), 250 yards off the tee is no longer good enough. On any given day, your patients are also on the golf course or at the driving range trying to drive the ball 300 yards.

Paul Chek, in his excellent book, The Biomechanics of Golf, writes: “Amateur golfers achieve approximately 90 percent of their peak muscular effort when driving a golf ball. This is the same intensity as picking up a weight that can only be lifted four times before total fatigue.” And that’s just for one swing! Golfers take hundreds of swings when they play or practice golf.

Golfers have a high incidence of injury. It has been reported that nearly 50 percent of golfers will eventually suffer a golf-related injury. The injuries are of the repetitive strain variety. Your patients swing their golf clubs at speeds of 90 to 115 miles per hour. When they swing off-balance, there is undue and often violent strain on the muscles, tendons, ligaments and joints of the body.

So, how does one identify issues of balance in the golf swing? It begins with understanding the “plane line.” This is a line on the ground that starts just behind the golf ball and runs 10 feet behind the ball. There are four key points to identify when your body begins to move and the club begins to swing relative to the plane.

To swing on-balance means that, as you generate kinetic energy during your backswing, you will release the stored energy down the plane line through the ball and directly toward your intended target.

An off-balance golf swing implies that you have lost the necessary positional relationship and alignment to the Plane Line.

During the downswing, the stored kinetic energy is not released toward the intended target. The body will react by reflex once it realizes it’s out of position. Watch compassionately as golfers flip their hands and overreach, push and pull with the arms, then lunge at the ball. They will do whatever it takes to “get that darn ball to behave!” However, the muscles, tendons, ligaments and joints eventually become strained from the abuse.

The golfer must undergo repetitive, yet objective, neuromuscular re-education. The goal is to retrain the body to release the stored kinetic energy of the backswing safely and efficiently down the plane line, through the ball and toward the intended target. This will minimize and, in many cases, eliminate the unwanted strain on the muscles, tendons, ligaments and joints of the injured golfer.

Using a piece of tape, tape the plane line on the floor, and rehearse the backswing and downswing with the forward arm parallel to the Plane Line between 6-9 o’clock on an imaginary clock face. (You do not need to hit balls to rehearse. In fact, it’s better to not hit balls while re-educating the neuromuscular pathways and motor memory). You will need a device known as a “swing light trainer” to be able to practice tracing the incline plane of the club shaft relative to the plane line. This should be repeated 30-50 times daily for three weeks. After three weeks of perfect rehearsal, your patient will have a new golf swing.

Jeff Blanchard, D.C., is a Golf Professional. For more information, go to www.GolfInjurySeminars.com or call 805-772-8298.