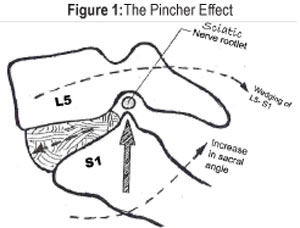 The purpose of this paper is to review the historical facts of a condition known as Restless Leg Syndrome (RLS) and present a new probable cause for the symptoms. The National Sleep Foundation reports about ten to twelve million cases exist in the USA alone. The real cause of RLS has evaded medical science, thus preventing effective treatment for the millions of people who are searching for a peaceful night’s rest. Many major cities have now formed support groups to help individuals cope with the mental or psychological aspects of this disease. The information contained in this article reviews new clinical research information developed by examination and treatment of several hundred cases of RLS over a twenty-year period. (s.s)

This chronic condition has probably existed for thousands of years but was first described in English literature in 1672 by the physician Sir Thomas Willis. Oppenhiem, in 1923, described RLS as a neurological disorder. In 1944, a Swedish neurologist more fully described it and named the disease Restless Legs Syndrome. Other names are nocturnal myoclonus, which describes the leg movement associated with it: Ekbom syndrome, the wittmaach-Ekbom syndrome, or anxietas tibialis. Commonly called Jimmy legs or spare legs, this disease affects mostly middle aged people, 45-years and older, with a large percentage (75%) being women.

RLS symptoms have a variety of descriptions. Some call it a stinging, burning feeling; others an army of ants trooping up and down your legs or a pins and needles feeling. Another group defines it as a strong urge to walk or kick the legs, while some feel a creepy-crawly, tingling sensation. A small percentage describes a pulling or painful perception; while, to some sufferers, it feels like a hyperactive nerve.

The most cited location for RLS is the lower extremities with a small percentage in the upper extremities, although, theoretically, it can occur in any body part. One or both legs may be affected, usually the calf or below the knees. Normally, the unpleasant sensations occur at night when reclined, but may take place during the day when sitting too long in a non-supportive seat, such as a car seat or theater seat.

Even though those people most often affected by RLS are middle to older age, it can affect any age or sex. Younger people with the symptoms many times are diagnosed as having growing pains. In the initial phase, the nerve sensations improve by moving the legs frequently. The second phase requires walking, and/or stretching the legs for temporary relief. Lower leg massage also provides partial relief, when performed on a regular basis.

There are no laboratory tests, according to most medical sources, that can diagnose RLS. In most cases, the doctor evaluating a patient with these symptoms can find nothing abnormal. A patient’s history may reveal if RLS is present. If the following conditions are present, they will confirm RLS.

1. Unpleasant sensations in the legs with an urge to move them.

2. This urge to move them begins or worsens when lying down (especially at night), or

3. These sensations are totally or partially relieved by movement (stretching) or walking.

Many medical scientists concede there is not enough evidence to support a major cause of RLS symptoms. According to several sources, a probable cause may be a congenital link, since it tends to run in some families. Pregnancy is a cause, since some women develop RLS symptoms during the last trimester of pregnancy which usually disappears after delivery. Anemia, according to some authorities, may be associated with RLS symptoms and may improve once the iron levels are corrected. Most sources feel that taking stimulants, such as cokes or coffee, can increase the RLS symptoms. Some groups feel there is a related sleep disorder characterized by involuntary leg jerking or movement. This periodic limb movement during sleep is called PLMS which may occur every 10 to 60 seconds. There are also certain diseases that can cause RLS symptoms as well as some types of medications.

If RLS is confirmed, mild cases may be treated by therapies such as leg massage, heat or ice packs, exercise and eliminating stimulants such as coffee and cokes from the diet. In the moderate to severe cases, medications are prescribed to help control the symptoms. People with RLS respond differently to medications, so there is no one drug that is effective for everyone. Most medications are nervous system depressants such as dopaminergic agents used to treat Parkinson’s disease. Many of these drugs lose their effectiveness after long term use and have to be discontinued or changed. Alternative approaches consist of transcutaneous electrical nerve stimulation applied to the legs or feet for twenty to thirty minutes to reduce leg jerking. The mineral magnesium is orally administered to reduce the tension in the leg muscles resulting from the RLS condition.

Some experts suspect a glitch in the nervous system, either in the brain or spinal cord; however, my clinical research indicates nerve root compression (pinched nerve) of the sciatic nerves (bilateral) is a major reason for the RLS symptoms. X-ray evaluation of over 200 patients, over a twenty-year period, reveal a common misalignment of L4, L5 and S1 spinal segments which reduces the size of the neural foramina at those levels, resulting in the pinching of the sciatic nerves. The compression may vary in intensity, creating several categories of symptoms ranging from a slight nervous feeling in the legs to severe jerking and pain—especially when lying down at night or sitting. (Table 1) This is primarily due to the loss of lumbar lordosis with concurrent weakness of the erector spinal muscles and hypertonicity of the ileopsoas muscles resulting in the anterior wedging of L4-5-S1 segments. (Figure 2). Dr. Free refers to this wedging as the pincher effect. (Figure 1)

What types of activities or professions are more prone to Restless Leg Syndrome?

In my professional opinion, the major things are those that require a person to sit, bend or stand most of the working day. Seventy-five percent of the work force sits on the job. This includes office workers, computer operators, car and truck drivers, who are driving eight to ten hours daily, and housewives, who vacuum and mop and, most importantly, care for small children. Pregnant women also are prone to RLS due to an increased lumbar lordosis (sway). These and other professions, which require the person to perform frequent bending or sitting, are subject to the Restless Leg symptoms.

RLS can be congenital. Certain types of postures can be inherited which can invariably lead to the RLS condition. The excessive sway back posture and the hunch back posture can be congenital due to the increase of the lumbar lordosis. People possessing these irregular postures that are involved in bending or sitting on their jobs are more subject to RLS.

Can the condition be corrected or improved?

Yes, the most effective treatment we have found to relieve the symptoms of RLS is proper spinal manipulation, with the application of electrical micro-current therapy and corrective exercises. There are three major types of stretching exercises that will aid in maintaining the corrected L5/SI wedge, thus releasing the sciatic nerve pressure. If performed on a regular basis, the symptoms of RLS can be minimized.

Many chronic cases of RLS have developed calcification of the lower thoracic, upper lumbar spine resulting in stiffness and possibly spurring of the spinal vertebrae. Symptoms will change slowly on this type of spine until the areas of calcification have been improved through physical therapy and exercise. Lower body flexion and extension are severely limited when this calcification exists.

Our treatment success rate for RLS is shown on Figure 4. These percentages are based on over two hundred cases ranging from six months to forty years duration. Most were chronic cases, five years or more in duration.

Also, a double blind study was conducted utilizing ten patients with RLS symptoms, concurrent with low back pain. Using the same model plan as outlined above, these patients were receiving evaluation and treatment for low back pain only. The results from the study were very impressive. Nine of the ten participants informed the treating physician that the lower back pain favorably improved, but the RLS symptoms were the same. This study further verified the L5/S1 wedging to be the primary cause of the condition.

In my professional opinion, the cause of RLS is spinal misalignment resulting in nerve compression of the sciatic nerves (bilateral) creating a variety of symptoms from restless legs to foot pain and to muscle spasms of the legs. Specific spinal correction with proper exercise seems to be the long term corrective treatment. It is my hope and prayer that this information will help the millions of RLS sufferers throughout the country.

Correction or reduction of these symptoms can be accomplished by performing three basic exercises. These exercises have been chosen to reduce the lumbar wedging and sciatic nerve root compression. When performed on a regular basis, the symptoms of RLS can be relieved and a good night’s rest can be achieved.

Dr. Donald Free is a 1961 graduate of the University of Tennessee with a BS in Engineering Physics and a 1973 graduate of Palmer College of Chiropractic. He received an honorary doctorate in Electro Medicine in 1985 from the Electro Medical Institute and holds a fellow in the Academy of Electro Medicine. He has a diplomat status in the American Academy of Pain Management and the National Board of Chiropractic Examiners. He is the author of 22 peer reviewed research papers concerning advanced spinal systems and techniques.