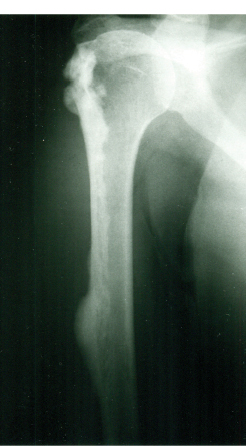 [Case History]
This male patient has a history of multiple traumas to his humerus.  Are these radiopacities exuberant callous formation from hematoma?
Diagnosis:  The answer is no!! This is a rare sclerotic skeletal dysplasia referred to as “MELORHEOSTOSIS”.
General Considerations
Melorheostosis is a rare, sclerosing bone dysplasia that was first described in 1922 by Leri and Joanny.  Synonyms include Leri type of osteopetrosis, osteosis eberneizzante monomelica, and flowing hyperostosis.  The name melorheostosis is of Greek derivation, meaning limb, flow, and bone, and aptly describes the hyperostotic appearance that has been likened to wax flowing down a lighted candle.
Radiologic Findings
Cortical thickening in a streaked or wavy pattern is the most marked roentgen feature.  In children the hyperostosis is primarily endosteal; in adulthood, periosteal bone deposition is more dramatic. (1) The radiographic findings appear to reflect developmental errors at the sites of intramembranous and enchondral bone formation. (1) The hyperostotic bone protrudes under the periosteum and usually follows along one side of a long bone.   Endosteal involvement may encroach upon the medullary space.   Bony masses resembling osteochondromas extend into adjacent articulations.

Involvement of the carpal and tarsal bones resembles the multiple bone islands that are seen in osteopoikilosis.  In the pelvis and scapulae (flat bones) the sclerotic bone may be in the form of dense radiations from the joint.  Heterotopic bone formation and soft tissue calcification are encountered and may lead to joint ankylosis.  Bone scintigraphy shows increased tracer uptake in the involved area.  A number of other disorders have been found in association with melorheostosis.  These include linear scleroderma, osteopoikilosis, osteopathia striata, neurofibromatosis, tuberous sclerosis, and hemangiomas. (1)