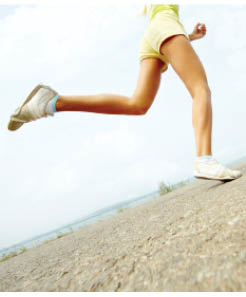 History and Presenting Symptoms
The patient, a 33-year-old female, is a marketing director who took up running for stress reduction and weight loss. She has been running for six months and has progressively increased her mileage. She is experiencing recurring and worsening pain in her left foot, as well as increased low-back tightness. She recalls no specific injury to her foot or back, but thinks she may favor her left foot while running.
Exam Findings

Vitals. This active woman weighs 154 lbs, which at 5′6″ results in a BMI of 24.9—she is right on the normal/overweight borderline. She mentions that she has lost about 14 lbs since beginning regular running, and hopes to lose about 10 more (which would be appropriate for her height). She reports that she has never smoked, and that her blood pressure and pulse rate are both at the lower end of normal range. She drinks one to two glasses of white wine each week, usually with meals.
Posture and gait. Standing postural evaluation finds basically good alignment with intact spinal curves and no lateral listing of her pelvis or spine. She demonstrates bilateral calcaneal eversion, worse on the left with a lower left arch. Treadmill gait evaluation finds obvious hyperpronation of the left foot and ankle when walking, which is noticeably worse when running.
Chiropractic evaluation. Motion palpation identifies a limitation in right sacroiliac motion with moderate tenderness and loss of end-range mobility. Several compensatory fixations are identified throughout the thoracolumbar region. Yeoman’s provocative test elicits moderate pain upon prone extension of the right leg. All other spinal and neurological tests are negative, including sensory and reflex testing of the lower extremities.
Primary complaint. Palpation of the left foot finds the fourth metatarsal bone to be quite tender to digital pressure just proximal to the metatarsal head. Manual testing finds no specific muscle weakness, nor is there significant asymmetry in muscle mass or leg diameter. All ankle joint ranges of motion are full and pain free, bilaterally.
Imaging
An x-ray series of the left foot finds an area of slightly increased density in the distal third of the fourth metatarsal bone. Based on the clinical and plain radiographic findings, she was referred for a bone scan of the lower extremities and feet. This study identified an area of increased uptake in the distal third of the fourth metatarsal bone, consistent with a stress response.
Clinical Impression
There is early stress fracture of the fourth metatarsal bone. While no actual fracture line is present, the plain film and bone scan findings support the clinical indication of a “stress reaction” of bone. This is in response to the increased biomechanical strain of her running program, which is accompanied by sacroiliac joint motion restriction and compensatory thoracolumbar fixations associated with altered gait.
Treatment Plan
Adjustments. Specific, corrective adjustments for the right sacroiliac joint and the thoracolumbar region were provided as needed. The left cuboid and navicular were adjusted while carefully avoiding placing pressure on the fourth metatarsal bone.
Support. Individually designed stabilizing orthotics were supplied to help provide support through the entire gait cycle, maintain the arches, limit calcaneal eversion, and decrease heel-strike impact. Two pairs of stabilizing orthotics were ordered, one designed specifically for her running shoes and the other for job-related dress shoes.
Rehabilitation. All weight-bearing exercise was restricted for two weeks. Then, towel scrunching exercises were initiated to strengthen the intrinsic foot muscles. After four weeks, she was permitted to gradually return to her distance running program.
Response to Care
She responded well to the spinal and foot adjustments, and reported a rapid decrease in her foot symptoms with rest. After four weeks away, she built back up to her previous running program. She reported no return of the left foot pain, and also noted a subjective feeling of smoother and more efficient gait with the orthotics. She has now been running regularly and without difficulty for the past four months.
Discussion
Metatarsal stress fractures often occur when moderate biomechanical asymmetries are stressed by rapid increases in weight-bearing exercise. Flexible, shock-absorbing orthotics will incorporate arch support while reducing pronation and decreasing the stress of repetitive heel strikes on the foot and spine.