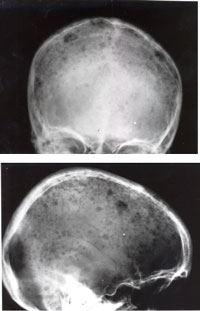 This 60-year-old male patient presents with head and spinal pain.

Note the diffuse osteolytic “punched-out” lesions affecting the bony calvarium which has been called the “raindrop skull” of multiple myeloma.

Osteolytic Defects. The radiologic hallmark of multiple myeloma is the sharply circumscribed osteolytic defect. These radiolucent lesions have been historically referred to as punched-out lesions. They are multiple, round, and purely lytic. The most frequent sites are in bones with hematopoietic potential. This appearance is most common in the skull, pelvis, long bones, clavicles and ribs. The pattern of widespread lytic lesions of the skull has been referred to as the raindrop skull.1 Calvarial involvement may occasionally be differentiated from metastatic carcinoma by the more uniform size of the lytic lesions in myeloma. The coexistence of both large and small lesions is often the mode of presentation in metastatic disease.1,2

Spinal involvement. The lower thoracic and lumbar spine are usual sites; however no spinal region is exempt. Early osteoporosis may be the only radiographic sign. As the disease progresses, pathologic vertebral collapse is inevitable. This often takes the configuration of a vertebra plana compromising the posterior one third of the vertebral body, as well as its anterior two thirds. Pathologic fracture in the spine may be singular or multiple and has been called the wrinkled vertebra of myeloma. Demonstration of punched-out lesions in the spine is rare. The vertebral pedicles are involved much less frequently than the body. Jacobson, et al.,3 suggest that the paucity of red marrow in the pedicles may allow their preservation with vertebral involvement. This has been called the pedicle sign of multiple myeloma. Since Jacobson’s original paper in 1958, there have been numerous cases reported refuting this sign and demonstrating isolated pedicular or combined vertebral body and pedicular involvement in multiple myeloma. Therefore, the usefulness of this pedicle sign to differentiate multiple myeloma from osteolytic metastatic carcinoma appears doubtful.1,2

Pelvic and Long Bones. Diffuse osteolytic round or oval lesions predominate without any reactive sclerosis. Medullary bone destruction abuts the endosteal surface of the cortex. The diaphysis is an area frequently involved in the long bones, which is consistent with the anatomic distribution of active red bone marrow. The humerus and femur are favored sites. Widespread disease throughout the pelvis and sacrum creates diffuse lytic lesions, which are fairly symmetric.1,2

In patients with multiple myeloma, the overall prognosis is poor.1,2 Over 90 percent die within three years. Treatment is usually palliative, with the aim of minimizing the patient’s suffering. The two major forms of treatment are radiotherapy and chemotherapy. Plasma cells are characteristically radiosensitive and radiotherapy is of established value in the control of localized symptomatic lesions, which typically transform to a blastic area. Of the chemotherapeutic agents presently available, Melphalan and Cytoxan are the two drugs most useful in attempted long-term management. The importance of ambulation and adequate hydration cannot be overemphasized. The constant threat of hypercalcemia, hypercalciuria, and hyperuricemia necessitate continual attention to these aspects of general care.1,2,3