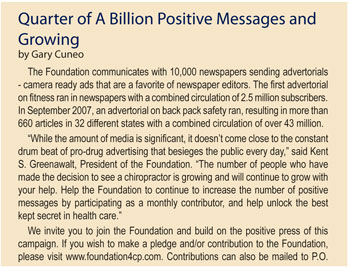 When you see a headline with the word “chiropractic” do you worry about the content of the story? Are you frustrated that the miracles you see every day in your office aren’t made known to the public? Instead, consumers are exposed to a drumbeat of critical stories about our great profession. It’s no wonder that the percentage of consumers seen by our doctors is so low. You and I both know that chiropractic is the best kept secret in health care.

Since July of last year, the Foundation has placed full-page ads featuring Sarah Harding, Ms. Fitness USA 2006, telling her positive experiences about chiropractic in such national publications as Newsweek, Sports Illustrated, T.V. Guide, New York Times Magazine, Martha Stewart Living, Health and U.S. News and World Report. This month, the ad appears in Working Mother. Place a copy in your reception area. Your patients will be impressed by the high quality of the ad.

To supplement this effort, we have retained a prominent East Coast public relations agency, CPR Communications, which is responsible for generating positive media for the profession. At least monthly, they issue positive press releases and public service announcements (PSA’s) highlighting certain aspect of the profession as well as advertorials.

Already, the releases have generated excellent publicity, including headlines in a Seattle newspaper regarding the positive effects of chiropractic on reducing blood pressure. We know that over 150 AM/FM radio stations are playing our PSA’s. So far, newspapers with a circulation of over fifty million have carried our advertorial regarding backpacks and this number continues to increase.

Based on what we have been able to track through our agency, we have generated over ninty million positive messages regarding the profession and this doesn’t include the TV spot we purchased earlier in the year that was broadcast to 140 million households nationwide.

We know this isn’t sufficient to offset the multimillion dollar campaign of the drug industry. But we can be competitive and we do have a basis of strong support in the profession to expand our efforts. We have the backing of every major national chiropractic association, including the ACA, the ICA, and the ACC, in addition to over twenty-four state associations, many chiropractic colleges and prominent leaders representing a cross section of the entire chiropractic profession.

Would you consider becoming a Foundation supporter as I have? You can help make the difference and I can assure you that every dollar you contribute will go directly to promote chiropractic. Not only is the public relations agency providing its services at no cost, but staff support is being covered by a special gift from FootLevelers. Even the better known charitable organizations can not make this claim

There may never be a better opportunity for a successful national public relations campaign. We may never have such unification behind a single idea or the ability to use 100% of one’s contribution to promote the profession.

The Foundation has only been promoting chiropractic since last July, yet it is already the longest continuous national public relations campaign in our profession’s history. This effort can only expand and continue to make history if the majority of the chiropractors get behind it. Right now, we are asking you to get behind this most important effort.

It is time to give back to the profession that has given you so much. Help us to unlock the best kept secret in health care by committing to making your monthly donation today.

Dr. Hoffman is a Board member of the Foundation for Chiropractic Progress and President of the Masters Circle. You may reach him Dr. Hoffman at 800-451-4514.