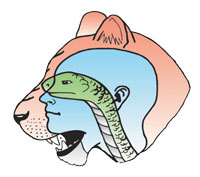 Three Brains? … Normally we think of the brain as singular! However, that concept changed when Neuroscientist Paul MacLean, Ph.D., identified three different parts of the brain: the Reptilian, Mammalian and Neocortex Brains. Each is distinctly unique and radically different from the other in chemistry, structure and behavior. MacLean describes the three brains saying, “Stated in popular terms, the three evolutionary formations might be imagined as three interconnected biological computers, with each having its own special intelligence, its own subjectivity, its own sense of time and space, and its own memory, motor, and other functions.”1

Essentially, each of our three brains has its own agenda and can influence our health in different ways. According to MacLean: “. . . the forebrain could be compared to the driver of a vehicle. A fundamental difference is that, in the course of evolution, the brain has acquired three drivers, all seated up front and all of a different mind. While the three brains are interconnected, they also act individually. It deserves reemphasis that the three formations are markedly different in chemistry and structure and, in an evolutionary sense, eons apart. Moreover, it should be emphasized that, despite their interconnection, there is evidence that each brain type is capable of acting somewhat independently. With the evolution of the forebrain, the neural chassis acquired three drivers, all of different minds and all vying for control.”2

In many ways, this is a scary thought! Three different minds with three different agendas are trying to run the show, and it’s often not always clear who’s in control. Most of us would like to think that our Neocortex (Thinking) Brain is in control but, surprisingly, the Mammalian (Emotional) Brain is often more in control than we realize!

You’ve probably had an experience where you make a logical decision, like, “I’m not going to eat any chocolate or sugar today.” Then someone brings in a freshly made batch of brownies and, boy, do they smell great! You say to yourself, “No, I’m not going to eat any of those.” Then, before long, you start thinking, “Well, maybe just one little bite wouldn’t hurt.”

That’s the Mammalian Brain starting to take over. From there, a short battle ensues between the Mammalian and Neocortex Brains and, if you’re like most people, guess who wins. Yep, the Mammalian (Emotional) Brain wins almost every time!

A Brief Recap of Our Three Brains—

How the Three Brains Affect the Health of our Patients—

Our patients want to get well; truly they do. The average patient comes to our office because his/her Neocortex (Thinking) Brain has made a decision that it’s time to get help. As chiropractors, we do our best to resolve the patient’s complaint and, in most cases, we are very successful in helping the patient by applying our skills in adjusting the spine (here, in a large part, we’re working with the Reptilian Brain).

How can we use the Three Brains to help our patients?—

1. Understanding that we have three brains and how they function can be very helpful in the healing process. You can always Google the Internet for more information and/or find books, charts, etc., that relate to this cutting-edge information.

2. It’s often a huge relief for patients to discover that they might have a mind-body physiological component that’s affecting their health. Let them know that they really have three brains and that, in most cases, they’re not even consciously aware when the Mammalian (Emotional) Brain is in control. Sometimes, however, patients are very aware that there’s an emotional component happening. In these cases, if you already have a way to address this factor, use your present technique(s).

If you don’t already have a way to work with the Mammalian (Emotional) Brain, here’s an easy-to-do approach that can offer relief during times of emotional and/or physical stress. It uses the Neurovascular Reflexes originally discovered by Bennett and is from an Applied Kinesiology textbook written by David Walther, D.C.: The neurovascular reflex is located bilaterally on the frontal bone eminence and is treated with a light, tugging contact, as is usual for neurovascular reflexes. It is necessary to vary the vector of tug on the skin until maximum pulsation is felt. In some cases, it may be necessary to hold the contact for several minutes.3

3. Keep learning. Nowadays, there are many techniques that engage the powerful Mammalian Brain.

The Neuro Emotional Technique (NET) is one such approach that brings the Mammalian (Emotional) Brain into the healing process. Unresolved issues related to the patient’s condition are quickly identified, which immediately activates changes in the patient’s physiology. Then a specific spinal adjustment is made to help the patient’s body come to closure with this unresolved response. The whole process takes only a few minutes and can bring amazing relief to many chronic physical problems. As you can imagine, this is very rewarding for patients who have been suffering with chronic conditions and, many times, it seems like a miracle! Dr. Scott Walker graduated from Palmer College of Chiropractic in 1965 and developed The Neuro Emotional Technique® (NET) in the early 1980’s. Dr. Walker is an instructor for the NET seminars is also the developer of a line of homeopathic products, NET Remedies, as well as the co-owner of The Home Run Practice, a practice management approach that uses NET.

Dr. Deb Walker graduated from Los Angeles College of Chiropractic in 1978 and is the co-developer of N.E.T., Inc. Dr. Deb is the company’s CEO and one of the instructors for the NET seminars.