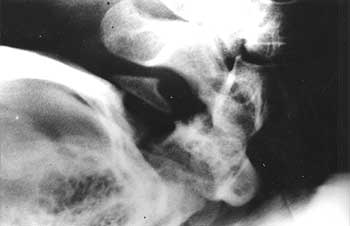 Embryology—Ossification of the first cervical vertebra begins about the seventh fetal week at the lateral masses and proceeds perichondrally in a dorsal direction, creating the posterior arch of the atlas.  In the second year of life, a secondary growth center for the posterior tubercle develops between these neural arches.  Complete fusion of the posterior arch should be noted between the third and fifth years.1

Radiologic Features—An absent posterior arch can be easily visualized on standard lateral cervical radiographs by the lack of a bony posterior neural arch.  A commonly associated finding is enlargement of the superior aspect of the second cervical spinous process, which has been referred to as a mega-spinous process, representing fusion of a rudimentary posterior arch and posterior tubercle of the atlas (not present in this case).2  One may also observe increased size of the anterior arch of C1, which is thought to be stress related and present in this case.  This is a helpful radiographic sign and suggests a long-standing congenital origin to the defect.

Medicolegal Implications of Agenesis of the C1 Posterior Arch
The integrity of the transverse ligament may also be compromised in the maldevelopment process; therefore, a cervical flexion radiograph should be performed to evaluate the atlantodental interspace.