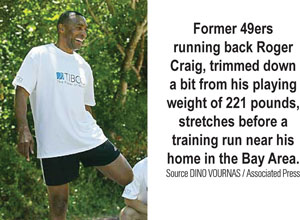 Roger Craig, All-Pro running back, 3 times Super bowl Champion, was born on July 10, 1960, in Davenport, Iowa, and has supported chiropractic since he was very young. Read here his story, history and the continuation of following the path of a healthy lifestyle, the chiropractic way!

When asked about chiropractic’s effectiveness, Roger Craig, formerly of the San Francisco 49ers, stated, “We won four Super Bowls in the 1980’s with it, so it must be doing something right!”

“Do I believe in chiropractic? Let me answer it this way. I’ve sent over 30 of my teammates, including All-Pro quarterback Joe Montana, to the chiropractor and, because of chiropractic, I never missed a game in 8 years!” quoted Craig.

Roger Craig is another great professional athlete whose commitment to endurance, strength and structure (ESS) made a huge difference in his historic National Football League career. A key member of the 1980’s San Francisco 49ers teams that were named Team of the Decade, Roger won three Super Bowls and made the playoffs in every one of his eleven years in the league. He was the innovator of the “all-purpose running back” in many ways, by becoming the first player in NFL history to rush and receive for at least 1,000 yards in the same season. He was also the first running back to be elected to the Pro Bowl as both full back and half back, and he remains the only running back to lead the NFL in reception in a single season and to receive for over 100 yards in a Super Bowl.

Roger was a pioneer in his training also, by incorporating endurance, strength and structure into his fitness routines. When he arrived in the NFL in his rookie year, he received great advice from a mentor of his, Walter Payton, who said to Roger, “Never lose your endurance.” Roger took Walter’s advice to heart and maintains that same attitude today, running nearly 40 miles per week at the age of 49.

Strength training was also a key element of Roger’s success and durability. Roger performs strength training exercises with and without weights to keep his body physically strong, toned and looking good.

Since he was in the 5th grade, Roger has made chiropractic care part of his lifestyle. He grew up in Davenport, Iowa, which is the home of Palmer College of Chiropractic, where Roger and his family would go for their regular chiropractic adjustments to keep their bodies aligned and balanced. He continued the structural element of his training at the University of Nebraska, where he was named an Honorable Mention All American.

When he got to the NFL, Roger became a pioneer by bringing chiropractic to many of his teammates, including superstars Joe Montana and Jerry Rice. Their visits to Chiropractor Dr. Nick Athens were initially met with resistance by the 49ers medical staff. The players knew the importance of the care they were receiving, as it kept their bodies aligned and balanced and their nerves firing on all cylinders. Just like we saw in Terry Schroeder’s example at the Olympics, chiropractic has now become a key component of the majority of professional sports teams and athletes’ lives.

From the day he stepped away from the NFL, he continued training like an athlete, running 30-35 miles and lifting weights three times a week. He’s a morning runner, up by 5:30, out the door no later than 6:30.

Said Craig matter of factly, “I don’t know what it’s like to be out of shape.”

The marathon idea long lingered in Craig’s mind. His sister Brenda Martinez, who died in a car accident, ran five of them. He made his 26.2-mile debut at the seventh annual Suzuki Rock ‘n’ Roll Marathon, joining about 18,000 runners and walkers.

The balance of the ESS, “was definitely a key reason for my durability as an athlete and I believe it is a key reason why I am still healthy and in the best shape of my life today, even after football,” says Roger. When I mentioned to him that Jack LaLanne had endorsed The 100 Year Lifestyle Workout, Roger jokingly said, “I’m going to be the next Jack LaLanne.

Eric Plasker, D.C., is the author of The 100-Year Lifestyle book and media-correspondent for The American Chiropractor magazine. To contact Dr. Plasker call at 1-866-532-3327 x 109