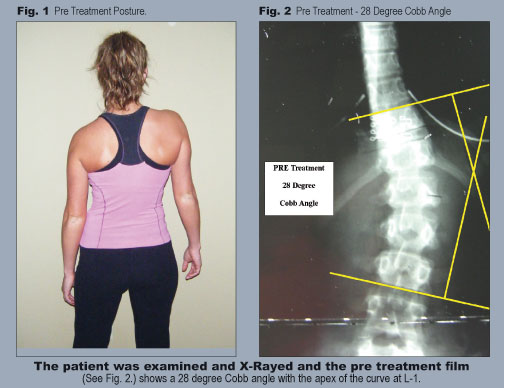 Let’s talk about postural rehab as it pertains to the scoliotic patient: scoliosis results from a wide range of causes, some of which may well preclude the possibility of a successful outcome under chiropractic care. Fortunately, all cases aren’t unmanageable. Many curves result from simple childhood postural imbalances which force young spines to grow abnormally.

The mechanism associated with this process is simple. When young spines assume imbalanced postures, weight is transmitted unevenly onto the growing endplates. If the asymmetrical loading is significant enough, one side of the vertebral body may grow slightly faster than the other. This is known as the Heuter-Volkmann or Delpech effect in which linear endochondral growth is inhibited on the more compressed (concave) side of the curve. The result is gradual wedging of the vertebral body as growth on one side outpaces the other. Vertebral wedging and, consequently, much of the associated curvature becomes permanent once the growth process is completed and the endplates fuse.

For this reason, successful outcomes depend upon short circuiting this vicious cycle before patients reach skeletal maturity. The goal of postural rehab is to improve spinal weight bearing and reduce the asymmetrical loading onto the growth plates. If postural correction can be achieved before the growth phase is completed, it is often possible to allow the concave side of the vertebrae to slowly “catch up” with the convexity. Postural rehab for scoliosis might include such things as reverse posture exercises, corrective traction procedures, spinal remodeling, or therapeutic stretching techniques. In order to give you a feel for how this takes place, I would like to share with you a real case which was managed by one of our clients.

Dr. Steve Blandford, Marion, IL, recently was called to discuss a case. The patient, a thirteen-year-old female, consulted Dr. Blandford in January of 2007 regarding a pronounced thoracolumbar scoliosis which had been discovered earlier by her medical practitioner. The curve had been observed by the medical practitioner over a nine-month period, during which time it had worsened considerably. Dr. Blandford’s postural examination revealed pronounced right translation and left lateral flexion of the thorax relative to the pelvis. Figure 1 shows our model simulating the patient’s pre-treatment posture which has been exaggerated somewhat for purposes of illustration.

The patient was examined and X-Rayed and the pre-treatment film (See Fig. 2.) shows a 28 degree Cobb angle with the apex of the curve at L-1.

The patient was treated using diversified and drop table adjusting procedures and reverse posture exercises. In addition, the patient was instructed to perform spinal remodeling sessions for twenty to thirty minutes daily at home. Spinal remodeling typically consists of the patient resting passively with the spine in the reverse or “opposite” position of the abnormal posture observed during the postural examination. In this case, the patient was given a firm, pyramid shaped, foam fulcrum to place beneath L-1 to facilitate stretching of tight tissues at the apex of the curve.

The patient was treated in the office three times weekly for approximately three weeks and then rechecked once every four to six weeks until November of 2007, at which time a post care film was taken to determine the status of the curvature. During this time, the patient was very faithful in performing her spinal remodeling sessions and exercises at home. Figure 4 shows the post care film with the Cobb angle reduced by fifteen degrees. That’s a thirteen-degree correction in a period of eleven months with a total of only sixteen office visits.

Discussion: Luckily, this case presented for chiropractic care before the growth process ended. Early intervention favors successful outcomes by allowing for additional treatment prior to the end of skeletal growth. This excellent correction is a great example of the synergy created between a doctor well versed in postural care methods and a patient disciplined and determined to follow through with the all important program of home care. Congratulations to both doctor and patient for all their hard work!

Dr. Mark R. Payne is the president of Matlin Mfg., a manufacturer and distributor of postural rehab products since 1988. To download a full and unabridged version of this article, link to www.MatlinMfg.com. To learn more about managing the scoliotic patient with simple postural rehab methods, call 1-334-448-1210 for our Free Report: Correcting Posture in the Coronal Plane.