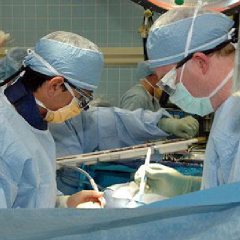 In a recent study, “Manipulation or Microdisketomy for Sciatica? A Prospective Randomized Clinical Study,” (Journal of Manipulative and Physiological Therapeutics, October 2010, Vol. 33 Iss. 8, p: 576-584), researchers concluded that spinal manipulation was just as effective as microdiskectomy for patients struggling with sciatica secondary to

“To our knowledge, this is the first, randomized trial that directly compared spinal manipulation, which in this study was delivered by a doctor of chiropractic, and back surgery, two popular treatment choices for this prevalent health condition,” says Dr. Gordon McMorland, who co-authored the paper with neurosurgeons Steve Casha, MD, PhD, FRCSC, Stephan J. du Plessis, MD, and R. John Hubert, MD, PhD, FRCSC, FACS. “Sciatica is a serious spinal condition that causes pain, numbness, or weakness in one or both legs.  Many times when symptoms become debilitating and without further help, surgery is prescribed to alleviate discomfort.  But surgery is not without financial and physical drawbacks.”

According to the study, “Outpatient Lumbar Microdiscectomy: A Prospective Study in 122 Patients”, more than 200,000 microdiskectomies are performed annually in the United States, at a direct cost of $5 billion, or $25,000 per procedure. In this year-long study, consenting participants were chosen randomly to receive either an average of 21 chiropractic sessions over a year or a single microdiskectomy, both with the additional integration of six supervised active rehabilitation sessions and a patient education program.  If cost is assumed at $100 per chiropractic visit, there is a direct, total savings of $22,900 per manipulation patient. System-wide, this could save $2.75 billion dollars annually.

“After a year, no significant complications were seen in either treatment group, and the 60 percent patients who benefitted from spinal manipulation improved to the same degree as their surgical counterparts,” says Dr. McMorland, who also points out that, “The 40 percent of patients who were not helped by manipulation did receive subsequent surgical intervention. These patients benefitted to the same degree as those that underwent surgery initially, suggesting there was no detrimental effect caused by delaying their surgical treatment.”

“Our research supports spinal manipulation performed by a doctor of chiropractic is a valuable and safe treatment option for those experiencing symptomatic LDH, failing traditional medical management.  These individuals should consider spinal manipulation as a primary treatment, followed by surgery if unsuccessful.”

About Foundation for Chiropractic Progress

A not-for-profit organization, the Foundation for Chiropractic Progress aims to inform and educate the general public about the many benefits associated with chiropractic care. To learn more about the Foundation, please visit us on the web at www.yes2chiropractic.com or call 866-901-F4CP (3427).