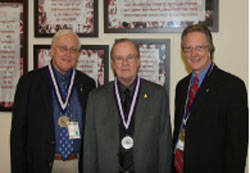 In addition, nine new members were inducted as Fellows of the Palmer Academy of Chiropractic during Homecoming.

Lora Tanis, D.C., D.I.C.C.P., is a 1989 graduate of Palmer’s Davenport Campus who practices in West Milford, NJ. She spoke on “The Effects of Intra-Uterine Constraint on a Developing Baby” during Palmer Homecoming 2009.

David Chubb, representing Neuromechanical Innovations, pictured with Tracy and TAC is among the 50+ vendors at the expo. The Impulse Adjusting Instruments® with three force settings set at 6Hz for a maximum duration of two seconds. With Impulse, faster and more efficient adjustments will be achieved!