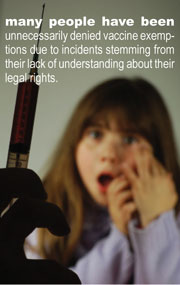 Agrowing number of parents and healthcare professionals around the world have questioned mass immunization policies in recent years, spawning a growing interest in legal exemptions. Vaccines are mandated in all U.S. states and territories, but each also offers one or more exemptions. Probably the most commonly exercised, and the most legally complex, are religious exemptions, currently offered in forty-eight states.

There’s a lot of information on the Internet and from other sources about vaccine exemptions. Unfortunately, much of it is misleading or outright incorrect, often appearing to reflect more what the writer feels the law should be rather than a clear understanding of what the law actually is. The truth is that many people have been unnecessarily denied vaccine exemptions due to incidents stemming from their lack of understanding about their legal rights. Others have failed to pursue an exemption under the mistaken assumption that they don’t qualify for one, or have needlessly given into pressure from local authorities to vaccinate against their wishes, despite qualifying for an exemption. Understanding your rights can make the difference.

A complete explanation of the law on vaccine religious exemptions is beyond the scope of a single article, but an introduction to some of the more important and commonly misunderstood aspects follows.

First, in the U.S., vaccine requirements and exemptions1 are addressed at the state level, as Congress lacks authority under the Constitution to address vaccine requirements for state residents.2,3 However, one’s right to refuse immunizations in the exercise of one’s religious beliefs is a right afforded by both state and federal law,4 primarily by way of state statutory and regulatory code and the U.S. Constitution’s First and Fourteenth Amendments. State constitutions may play a role as well.

Rights are seldom, if ever, absolute. One person’s right to exercise their religion is limited by opposing rights—in the case of vaccine religious exemptions, the state’s right to require immunizations for the presumed benefit of society. Therefore, determining your rights is not simply a matter of reading the relevant state codes and constitution sections. While those may be necessary starting places, they will tell you little about the precise boundaries of exemption rights with regard to the specific facts and circumstances of your life. Make no mistake—the application of those laws can vary, sometimes radically, with the widely varying situations of individual people and families.

How, then, do we determine how the law applies to any given situation? We must look beyond the language of codes and constitutions to legal precedent. Legislatures may enact statutes, but the courts interpret them—on a case-by-case basis, one legal dispute at a time. The U.S. Constitution is interpreted in the same way—by the courts, one legal dispute at a time. When a case in a lower (or trial) court is appealed to a higher (or appellate) court, the higher court may issue a written “opinion” of their ruling that, then, serves as guiding legal precedent in future disputes.5 So, to determine how state and constitutional laws apply to your specific situation, you must determine whether or not there is any applicable legal precedent.

Needless to say, the totality of court opinions constituting the body of legal precedent for any given area of law at any given time can never fully address the potentially infinite variety of hypothetical future scenarios that may arise under that area of law. So, when a new situation arises to which no prior legal precedent applies directly, it may be difficult to say with any certainty how the law applies to that new situation. This is often the case with vaccine religious exemptions. Furthermore, when the facts in a precedent case do resemble those of a current situation but are distinguishable from it, there may be opposing arguments about how—or even if—the precedent applies, with corresponding uncertainty as to what the law is or should be for the current situation.

Unfortunately, the complexity doesn’t end there. When legal precedent does apply to a current situation, a determination must be made as to whether it is “binding precedent”—precedent that determines what the law is presently—or “persuasive precedent” that provides only guidance for what the law arguably could or should be. The distinction is pretty straightforward. Higher court opinions are binding on lower courts for disputes that arise within the same jurisdiction, but they serve only as persuasive precedent for other jurisdictions.6 This distinction can be critical. A court can rule contrary to persuasive precedent—against you—if it believes that doing so is the more just outcome in your particular case, but courts have no discretion to rule inconsistently with binding precedent. As you might well imagine, arguments favoring immunizations often have the legal advantage, so it may be helpful for those claiming a religious exemption to have binding precedent supporting their rights.

As it turns out, for the majority of U.S. residents, most of the precedent for vaccine religious exemptions is persuasive precedent, coming from New York federal courts and only a handful of state appellate courts. Don’t be too quick to discount the value of persuasive precedent, though. In many instances, it carries weight sufficient to clarify your rights under state law and the Constitution that can help get the exemption even when there are complicating circumstances. However, where persuasive precedent directly contradicts state law rather than serving merely to clarify it, its application can be more tenuous. For example, some state laws require membership in an organized religion with tenets opposed to immunizations in order to qualify for a vaccine religious exemption. Local officials are bound by such laws, despite the fact that opinions from courts in other jurisdictions (i.e., persuasive precedent for the local state) ruled that such laws were unconstitutional in those other jurisdictions. This can be frustrating for people with personal religious beliefs opposed to immunizations who do not meet their state’s church membership requirements.7 Curiously, rights under the U.S. Constitution pertaining to the exercise of a vaccine religious exemption can vary from state to state, despite all states being subject to the same U.S. Constitution.

The ease or difficulty of exercising an exemption can also vary according to the differences in the specific wording of laws from state to state. For example, some states’ laws allow the state to question whether or not a claimed religious belief in opposition to the immunization requirements is truly religious or sincerely held. Where this is the case, attempts to exercise a religious exemption may be scrutinized, and exemption claims allowed or denied accordingly. Of course, lack of legal authority to question religious beliefs in states that don’t permit such an inquiry doesn’t always prevent local officials from making such an inquiry anyway. In those instances, rights may ultimately be honored or denied according to claimants’ knowledge of their rights and willingness to stand their ground.

Other exemption concerns involve more practical matters. For example, even if you know your rights under state and federal law and understand the legal strengths and weaknesses of your particular situation, you still have to deal with local authorities who may or may not know your legal rights and who, respectfully, may or may not cooperate with you even if they do. Sometimes, exercising a religious exemption is very straightforward and proceeds without incident. Other times, local officials resist even valid legal exemption claims. Sadly, reports of rude, uncooperative, and even coercive and confrontational behavior from local officials are not uncommon. Most of the time these folks are probably acting out of a genuine concern for the health and safety of the community (they do, after all, have a contrary agenda) but, sometimes, they overstep professional boundaries in deliberate attempts to discourage people from exercising a valid legal exemption right. It is most unfortunate that this should ever occur. Anyone who disagrees with current laws should seek redress from the state legislature via the appropriate political process.

Given the legal complexities of vaccine religious exemptions, many people concerned with them wisely choose to consult a knowledgeable attorney. It’s a small investment for the resulting insight, protection and peace of mind.

This article was originally printed in Health Trek, the Official Publication of the North Carolina Chiropractic Association. September/October 2007 edition.

1.  Exemptions are sometimes referred to as exceptions or waivers.

2.  Federal laws do address vaccine requirements and exemptions for immigrants and the military. They also provide a possible means of avoiding vaccines in the workplace on religious grounds.

3.  As a practical matter, the federal government exerts powerful influence over state immunization laws and policies.

4.  Mississippi and West Virginia are the only states that do not currently offer a religious exemption to immunizations.

6.  For purposes of this discussion, jurisdictions may include a single state or group of states, depending on the court.

7.  Exercising a religious exemption may still be possible for people in this situation, but it may require the support of a local attorney.

8.  The author has twice e-mailed the Immunization Branch about this, but the Branch has not responded.

9.  When a state agency’s policy conflicts with state statutory law, the statute is the higher authority.

Alan Phillips is a graduate of the University of North Carolina School of Law, and a member in good standing of the North Carolina State Bar, and the North Carolina Judicial District 15B and Orange County Bars. Alan is one of few attorneys in the U.S. who handles vaccine exemption cases, and perhaps the only one with a website dedicated to providing reliable, authoritative information on this topic. Alan’s website features free information, and a low cost e-book, The Authoritative Guide to Vaccine Legal Exemptions, that provides in-depth information about vaccine legal exemption law, for lay people and professionals alike. For information about presentations and consultations, contact Alan at [email protected]; call 1-919-960-5172; or visit www.vaccinerights.com.