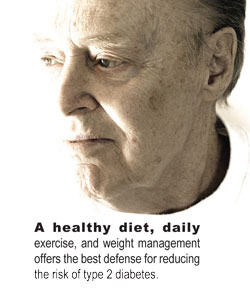 It’s estimated that, by the year 2010, some forty percent of Americans sixty-five or older will have adult-onset diabetes.

Diabetes was a rare illness in the United States in 1880, with only 2.8 persons out of every 100,000 having diabetes. The rise in diabetes is associated the modern Western diet.

For every person who consumes only five pounds of sugar, there is another who eats 295 pounds annually. This accounts for 550 to 650 calories a day, or almost three pounds per week. In 2001, Americans spent $21 billion on candy alone—more than the gross national products of Lithuania, Costa Rica, and Mozambique combined.

As our consumption of high-fructose corn syrup has risen 250 percent in the past fifteen years, our rate of diabetes has increased approximately 45 percent in about the same time period.

A healthy diet, daily exercise, and weight management offers the best defense for reducing the risk of type 2 diabetes.

In several large scale studies with follow up periods of six to fourteen years, there was a decrease of thirty to fifty per cent in the development of type 2 diabetes among those who exercised regularly, compared with those who were sedentary. This result was found in both obese and non-obese men and women.

In Part One of this article, I explored the hypoglycemic anti-diabetic drugs (Avandia, Actos, and Metformin). These medications can be helpful, but are associated with life threatening side effects and ultimately fail to stop the progression of type 2 diabetes. “What about insulin therapy?” you may ask.

However, its use isn’t without risk. Insulin stimulates weight gain, a known risk factor for cardiovascular disease. As patients on insulin therapy gain weight, so do their requirements for increased insulin.

The majority of patients, some ninety percent are non-insulin dependent type 2 diabetic, and suffer from poor diet, obesity, and inactivity, not from a lack of insulin. I encourage my patients with type 2 diabetes to try neutraceutical therapies instead.

In the fight against type 2 diabetes there are dozens of safe and effective neutraceutical therapies. I’ll mention a few of my favorites below.

Corosolic acid is found in the leaves of the banaba plant that grows in the Philippines. Subjects using a corosolic acid preparation called Glucotrim each day for two weeks experienced a thirty percent drop in blood sugar levels. Researchers considered both levels of blood sugar reduction significant.

Corosolic acid may be defined as a phyto-insulin or insulin-like plant extract.

And how about this for a potential side effect: Subjects receiving the corosolic acid seem to show an increased tendency toward weight loss (an average weight loss of 3.2 pounds).

Gymnema Sylvestre research reveals that it lowers HbA1c from 10.1 percent to 9.3 percent. This is as good, if not better, than common diabetic drugs.

Clinical trials of vanadyl sulfate have been carried out in both type 1 and type 2 diabetics. Modest improvement in glucose tolerance and/or insulin sensitivity, especially in type 2 diabetes, has been observed, although the trials have been for a short period. In eleven type 2 diabetic subjects who were treated with150 mg/day of vanadyl sulfate for six weeks, there was a 20 percent reduced fasting plasma glucose and a ten percent reduced percent hemoglobin A1c from 8.2 to 7.6 percent.

Studies show that alpha-lipoic acid (ALA) speeds the removal of glucose (sugar) from the blood of people with diabetes and that this antioxidant may prevent kidney damage associated with diabetes. And several studies suggest that treatment with ALA may help reduce pain, burning, itching, tingling, and numbness in people who have nerve damage caused by diabetes.

In several studies, the mineral biotin has been shown to enhance the performance of insulin. Biotin supplements can also increase the activity of an enzyme, glucokinase, which the liver uses early in the process of utilizing blood sugar.

Chromium is an essential mineral for human nutrition and aids in the normal function of insulin. In twelve out of fifteen controlled studies of people with impaired glucose tolerance, chromium supplementation was found to improve some measure of glucose utilization or to have beneficial effects on blood lipid profiles.

The type 2 diabetic dilemma: Do they suffer with the advances of unchecked diabetes, including risk of heart attack, stroke, and an increased risk of cardiovascular disease death? Or, do they take conventional anti-diabetic drugs and increase their risk of heart attack, stroke, and death from cardiovascular disease? My patients opt for a healthy diet, daily exercise, and neutraceutical therapies. They decide to use prescription anti-diabetic drugs only when these safe and, often, more effective natural approaches fail to work alone.

Rodger Murphree, D.C., has been in private practice since 1990. He is the founder of, and past clinic director for a large integrated medical practice, which was located on the campus of Brookwood Hospital in Birmingham, Alabama. He is the author of Treating and Beating Fibromyalgia and Chronic Fatigue Syndrome, Heart Disease What Your Doctor Won’t Tell You, and Treating and Beating Anxiety and Depression with Orthomolecular Medicine. He can be reached at http://www.treatingandbeating.com/, by email at [email protected]or 1-205-879-2383

12. Ametov AS, Barinov A, et al. The sensory symptoms of diabetic polyneuropathy are improved with alpha-lipoic acid: The Sydney trial. Diabetes Care. 2003 Mar;26(3):770–6.