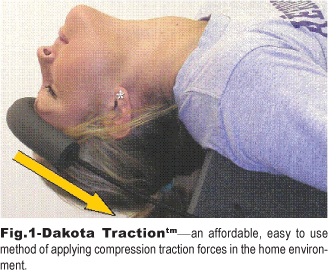 Last month I discussed why there’s no adjusting technique which is demonstrably better in terms of spinal correction. Obviously, there may be a host of situations when one technique is indicated (or contraindicated). That’s just common sense. But, in terms of actually effecting real structural change to the spinal curves, it just doesn’t matter much how or which technique system you use. Why? Because adjustments, regardless of technique, just aren’t very effective at correcting postural imbalance. Bummer.

So, if our adjustments aren’t really cutting it, then what should we be doing to correct spines? (Drum roll please.) And the short answer is extension traction. Yes, I know extension traction only addresses one aspect of spinal structure…the sagittal spinal curves. But loss of the normal spinal curves is a big time problem for almost all of your adult patients. It also happens to be the one area where almost every chiropractor experiences consistent difficulty in producing corrections. It’s true that there are other methods for addressing the sagittal curves, but none with a comparable track record. Extension traction is, hands down, the most effective and well documented method of postural correction available. And, with that authoritative sounding pronouncement by yours truly, you are no doubt ready to begin immediately equipping your office with the latest and greatest in extension traction modalities. Before you do though, you’ll want to know which of the many available methods is most effective. (You do want to know about the “World’s Best Traction” method don’t you?)

Well of course you do! (Which is convenient, since I’m already two full paragraphs into this article.) So let’s take a quick look at three tried and true methods of applying extension traction forces and highlight the pros and cons of each.

Compression Traction earned its nickname by virtue of the fact that the equipment used is designed to bend the head backward and inferiorly. (Hence the term “compression”.) In Fig. One, the patient is placed on a popular compression traction device…the Dakota Traction. Force (in the direction of the yellow arrow) is applied to the forehead with an elastic band, bending the head backward and downward into full extension. The purpose is to stretch anterior ligament and musculature to allow for a more complete return of the neck to its normal lordosis. Compression traction was first studied in 1994 and found to produce nearly three times the correction of adjustments alone.1

Pros? Affordable, simple to use, works well on all neck configurations (military, S-shaped, etc.). Cons? Best suited for home use. Some patients may find compression traction uncomfortable. If this happens, you will need an alternate method (see Fig. 2).

It didn’t take long before chiropractors began to experiment with variations on simple compression traction. One such variation was first contributed by Dr. Joe Stynchula (Harrisburg, PA). Dr. Joe combined the seated use of a weighted head harness with a “counter stressing” strap to pull anterior into the lordosis. A couple of variations on the method have popped up over the years, but the basic concept remains the same. The head weight pulls the head backward and inferior, while the counterstressing strap functions as an adjustable fulcrum to introduce a buckling force into the mid neck.

Stynchula’s method (AKA “Compression-CounterStressing” Traction) has also been studied and found to be essentially equal to compression traction in terms of restoring the cervical lordosis.2 Advantages include patient comfort, space efficiency, and ease of use. Fig. 2 shows the method in use. Compression-CounterStressing Traction is ideal for use in the professional office and also serves well as a backup method for home use, if patients can’t handle the Dakota Traction (See Fig. 1)

Extension traction can also be effective at restoring the lumbar lordosis.3 Fig. 3 shows a simple method of passive lumbar extension traction for home use. The patient is shown tightening the unit to apply force into the lumbar lordosis (see yellow arrow.) The patient then relaxes for the duration of the treatment. The device can also be used seated for use in the office. Advantages of the method are its affordability, effectiveness, and ease of use.

So what’s the “World’s Best Traction“? Well, while I would love to pitch my own products, the truth is that almost any form of extension traction is likely to be effective, regardless of the manufacturer. The laws of physics apparently don’t extend any special consideration to my company’s products. If a product extends the spine effectively, and holds it in the desired position for the requisite amount of time, there will almost certainly be some correction. Certainly, quality, value, and customer service will always dictate who you should do business with and I’ll be just bold enough here to say that we work very hard at those things. But that’s where it ends. Be wary of manufacturers making claims of therapeutic superiority. In the same way that there’s no “best” adjusting technique there’s, likewise, no “best” traction method. I’ve shown you three basic ways of applying corrective forces which have been proven to work well. Just be sure any equipment you buy works in the general manner described here and I think you’ll be pleased. In our next article, maybe we can talk about some other methods available to corrective care practitioners.

Dr. Mark Payne is the president of Matlin Mfg., a manufacturer and distributor of postural rehab products since 1988. A FREE SUBSCRIPTION to Postural Rehab…electronic newsletter on corrective chiropractic methods is available upon request. CALL 1-334-448-1210 or email [email protected]