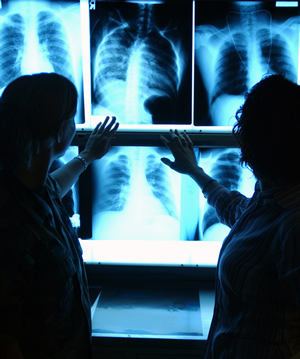 :dropcap_open:I:dropcap_close:t is critical for every chiropractor to have a support team of health care specialists in order to render the highest level of care for our patients. The radiologist is the first specialist that you should add to your team. In the triaging of our patients, the progression is to create an accurate diagnosis, prognosis and treatment plan and then to treat. Imaging, both basic X-rays and advanced imaging such as MRI’s, CAT scans and bone scans are often a critical step in getting to “first base,” with the diagnosis. Without any diagnosis, we cannot treat our patients and, without an accurate diagnosis, we can go from spinal experts rendering quality care to well meaning practitioners who hurt their patients.

It was reported by Lurie, Doman, Spratt, Tosteson, and Weinstein (2009) that 42.2% of the cases reported by radiologists were not clear in their description of the morphology of the lesion seen in MRI. While this does not conclusively represent that the radiologist made an error (although, in many cases, gross errors are seen nationally), it does create a huge issue for the clinician who relies on the radiologist to paint a “verbal picture” of the tissue and lesion structure, in order to create an accurate diagnosis, prognosis and treatment plan.

:dropcap_open:It was reported by Lurie, Doman, Spratt, Tosteson, and Weinstein (2009) that 42.2% of the cases reported by radiologists were not clear in their description of the morphology of the lesion seen in MRI.:quoteleft_close:

According to Magdy Shady, M.D., a neurosurgeon and fellow in neuro-trauma, he disagrees with the general radiologist over 80% of the time in the description of the morphology of the lesion, and will not make a surgical decision unless he has personally reviewed the films. This begs the question for the chiropractic profession, “At what level should we accept the radiologist’s interpretation of the film, and at what level of reading expertise should the individual chiropractic practitioners involve themselves in the process of interpreting the images rendering an accurate diagnosis?”

From a clinical perspective, some of the more common errors seen by radiologists are referencing the wrong side and calling cauda equina compressions “cord compressions.” Just recently, a radiologist in Washington state reported an enlarged artery on the intervertebral foramen erroneously. Each of these miscues alters the diagnosis, prognosis and treatment plan and creates havoc for both the patient and the practitioner.

In each of the above scenarios, the errors were realized by a chiropractor who was trained in MRI spine interpretation. Although chiropractors can return to school and get a diplomate in radiology (D.A.C.B.R.) which is highly recommended for those who want to focus primarily on interpreting film, the vast majority of us want to stay in our offices. For those practitioners, it is highly suggested that, as a profession, every D.C. take post-doctoral training in MRI spine interpretation, so that we all understand and can interpret the films to create an agreement with the radiologists’ reports.

Call it an ability to do an over read on the radiologist and it must be done. The 2009 Spine article mandates that we, as a profession, take responsibility for an accurate diagnosis of our patients. With a 42.2% unclear (error rate) reporting of the morphology of the lesion, circumstances require that we, at least, know the basics to say, “Something isn’t right and we need another opinion.” When there is a discrepancy in the interpretation, the team approach comes into play and we confer with the radiologist and ask what they see vs. what you see. If there is not an agreement, then a third party, hopefully a neuroradiologist, will be the final arbiter, so that an accurate diagnosis can be rendered. In some instances, another MRI sequence might be necessary. Either way, from a posture of clinical excellence, unless an accurate diagnosis is rendered, the clinician cannot create a treatment plan and render care. How can you treat what you do not know?